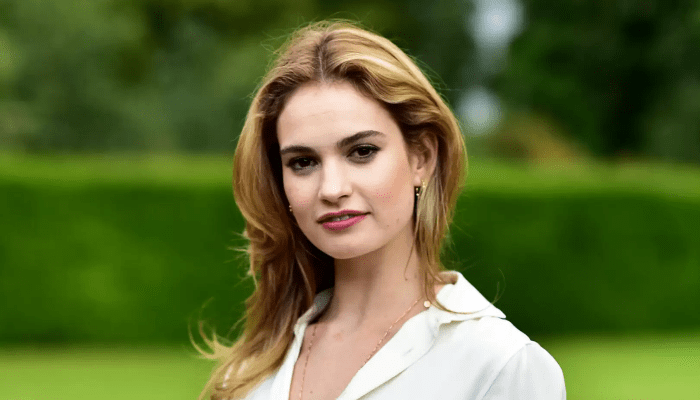 Lily James has been cast in the film Peggy Jo. She will play Peggy Jo Tallas, “a bank robber who committed her heists while dressed as a man.”

Robert Knott wrote the screenplay for the Phillip Noyce-directed film.

Peggy Jo is based on the real-life bank robber of the same name:

The first five times Cowboy Bob hit, between May 1991 and September 1992, his execution was near-flawless. Unlike most bank robbers, he stayed calm. According to witnesses, he never brought weapons, avoided the cameras for the most part, and checked the bills for dye packs (radio-controlled devices intended to stain both cash and thief bright red). He’d pass a note announcing the robbery and instructing the teller to hand over the cash, then walk out slowly and drive away calmly in his 1975 Pontiac Grand Prix fixed with stolen license plates.

He drove the FBI crazy. The beard and hat and silence made him hard to identify, and the stolen license plates made him almost impossible to track.

The sixth time, however, he screwed up. Maybe he’d gotten greedy, or maybe he’d gotten cocky, but when the Grand Prix pulled away from First Interstate Bank in Mesquite, Texas, it was sporting its actual license plates. Powell and his team traced the number, taken down by a witness, to a Ford factory worker nearby. His name was Pete Tallas and he’d given the Grand Prix to his sister Peggy Jo.

Powell and his team raced to the apartment where Peggy Jo and her mother lived, expecting to find a cowboy-hat-wearing boyfriend and a kiddie pool of cash. But there were only the women, and neither one of them had much to say about any robbery.

Even when agents found a mannequin head with a fake beard in the closet, and a sack full of money in the bedroom, even when they pressed Peggy Jo on the location of this boyfriend, all she had to say, according to Powell, was: “There isn’t any man. I promise you that.”

That’s when he noticed the glue still clinging to her upper lip and the flecks of gray dye in her hair.

The film has no production start date yet. No theatrical release date has been announced.

Leave your thoughts on this film casting news and this article below in the comments section. Readers seeking to support this type of content can visit our Patreon Page and become one of FilmBook’s patrons. Readers seeking more movie casting can visit our Movie Casting Page. Want up-to-the-minute notifications? FilmBook staff members publish articles by Email, Twitter, Facebook, Instagram, Tumblr, Pinterest, and Flipboard.