“But he desperately wants her to get better for Princess and Junior.”

A source close to Peter

A source close to Peter, 45, said: “At the moment there’s no plans for the way Pete and Katie share custody of the kids to change, or anything like that.

“But he desperately wants her to get better for Princess and Junior.

“There’s real concern that Katie doesn’t even realise how bad the situation has got.

“Whether it’s Katie being in denial or not, Peter doesn’t know if she’ll ever wake up to the reality of it all.”

Over the last few weeks, Katie has checked in and out of rehab for PTSD and cocaine abuse.

But her attempts to clean up have so far failed and last Wednesday at 2am she was arrested after crashing her £75,000 ride into a VW and a hedge.

Katie, who allegedly denied being behind the wheel at the time of the crash, spent the night in a cell at Plumstead police station.

She had been to a 30th birthday bash for ex-boyfriend Kris Boyson, 29, at a restaurant in Bexleyheath, South East London.

A source said it followed an all-day bender after being dumped by toy boy Alex Adderson, 25.

The reality star has now rekindled her romance with Kris, who has vowed to help the mum of five get her life back on track.

She is awaiting hearings on a number of driving offences, including flouting a six-month ban.

A pal of Katie’s told us: “Obviously Peter’s wife Emily is a doctor so there’s very real concern on that side about Katie’s wellbeing, never mind the kids.

“A rehab with a curfew that Katie could come and go was never go- ing to work.

“The freaky thing is Katie always said she’d die young – she actually said to me she’d die driving into a tree of something.

“It’s understandable that Pete is desperately worried about the impact this is having on their children.

“There was once a lot of love there. Of course he wants to see Katie well again. He gains no pleasure in watching her self-destruct and the impact that has on the children’s mental and social welfare.”

Katie has signed up to an- other series of reality TV show My Crazy Life, with a source describing it as her “financial lifeline”.

Both Kris and her estranged husband Kieran Hayler, dad to Bunny, 5, and Jett, 4, have been asked to feature. 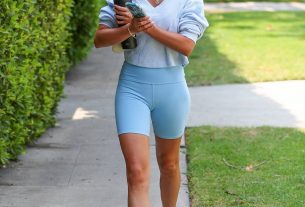 Sara Sampaio – Heads out to a Pilates class in West Hollywood

Myleene Klass – In all black seen at Global Studios in London