MAKING A SPLAH: Daniella Chavez’s bikini snap has been the talk of Instagram (Pic: CEN)

Playboy bombshell Daniella Chavez has been spotted wearing one of the tiniest bikinis we’ve ever seen.

In an image shared with her 11.9 million followers, the 33-year-old model posed in a black-two piece.

Fans were chuffed with her body-baring swimwear choice – but some couldn’t believe the skimpy fabric was enough to cover her curves.

This week, Daniella posed in a black microbikini.

The saucy two-piece features clear straps, creating the illusion that it is stuck on by magic alone.

Fans seem to appreciate the cossie, which struggled to contain the model’s curves.

Thankfully, she managed to avoid a wardrobe malfunction as she struck a pose by the sea.

But while Daniella received plenty of compliments, others struggled to understand how her bikini didn’t fall down.
One responder asked: “How is that being held on?”

A second said: “Please help me to understand that bikini.”

Another warned: “Watch that bikini doesn’t come off.”

This isn’t the first time Daniella has hit headlines in recent weeks.

In a cheeky clip, she used her right boob to knock the drink top off its perch.

After successful completing the task, she celebrated with a sexy dance.

Fans went wild for the clip, with 2.1 million of them watching it since it was posted. 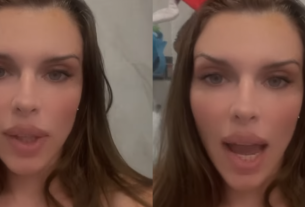 Timberland’s Most Iconic Boot Takes Things Up a Notch