It was a rare Witherspoon family outing on the red carpet.

In honor of The Hollywood Reporter‘s Women in Entertainment breakfast gala on Wednesday, many familiar Hollywood faces—including a few not often seen together—stepped out onto the red carpet outside Milk Studios in Calif. Among the famous attendees were Eva Longoria, Olivia Wilde, Mindy Kaling, John Legend, Kerry Washington and Reese Witherspoon. The Morning Show star was accompanied by not one, but three special dates—husband Jim Toth and two of her three kids, 20-year-old look-alike daughter Ava Phillippe and 16-year-old son Deacon Phillippe.

It’s not often fans get to see all four on the red carpet together. In fact, the last time they made such a joint appearance, it was in 2016 with her youngest son Tennessee Toth also in attendance. The entire family was elegantly dressed for the occasion with the ladies in dresses and the guys in suits.

Inside the event, Witherspoon’s kids got to witness the star as she was presented with an award by Washington and then deliver an empowering speech.
“Major congratulations to my mama, who received an award today for her leadership in the industry that she cares so deeply about improving,” Ava complimented on social media. “I’m so grateful to have a mom this thoughtful, passionate, and courageous, and I’m glad other people can recognize how special she is!”

See the family’s outing and more star sightings from the event in E!’s gallery below!

The Little Fires Everywhere actress smiled for the cameras on the carpet.

The family of four looked elegant at the A-list gathering.

The Bombshell actress struck a pose in stripes.

The When They See Us actress brought a splash of stylish blue to the carpet.

The Morning Show actress posed in plaid at the annual event.

The EGOT winner donned a navy suit for the special event.

The Bombshell star opted for a lilac power suit at the gathering.

The advocate smiled for the cameras in a vibrant blue wrap dress.

The actress paired her camel suit with a pop of blue.

The Affair actress’s pink tresses coordinated with the color of the event.

The actress rocked a violet monochrome ensemble for the occasion.

The activist rocked an orange striped suit with matching shoes for the event.

The Booksmart director posed in a blue jumpsuit on the star-studded red carpet. 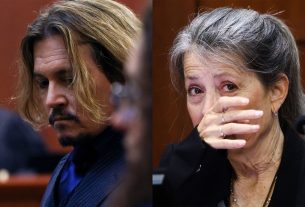 Johnny Depp’s Sister Testifies At Trial About Abuse They Suffered From Their Mother: ‘We Were Gonna Do It Different’

Taylor Swift Clearly Not Over Scooter Braun’s Purchase of Masters