He told Fox News: “I don’t think I could have made this movie if I hadn’t made the choice that it was my last time.”

But Blake Lively’s husband Ryan Reynolds has confessed he’s desperate to get Hugh back as Wolverine as part of the Deadpool franchise.

Deadpool 2 will be released later this month following the success of the 2016 original.

And according to the Canadian star, Wolverine is definitely somewhere in the Deadpool universe.

He told Entertainment Weekly: “He’s alive and well in my timeline. There is a Logan running around out there with a little bushy chest and his little sharpy, sharpy claws, and he is alive and well and ready to go. I would love that.”

But getting his former co-star to make an appearance in a further Deadpool outing is proving difficult.

Ryan went on: “I think convincing Hugh of that would be a near-impossible feat, but there’s no human being I love more than Hugh Jackman in that universe, and equally so as a friend. He’s just the best.

“I already miss him as Logan, so I’m one of those guyse that whenever I see him, I’m like, ‘Come on, man. Just one more. Come on. We’ll do it together. It’ll be fun. Come on! On three. Here we go, together. One, two, three, together,’ and it’s always just me saying it.”

It’s clear that the Hollywood hunks are close, as Ryan donned his Deadpool costume to hijack a video message Hugh recorded for a fan.

And if Ryan does manage to get Hugh back as Wolverine, it might not even be for a Deadpool film.

Speaking at a promotional event in Seoul, South Korea, he said: “I think going forward, it would be an X-Force movie, which would be his team, so to speak.”

FINAL: Hugh Jackman said Logan would be his last outing as Wolverine

He explained: “X-Force is generally made up of people who are very morally flexible, they’re the guys who do the work the X-Men wouldn’t or couldn’t do.

“So you’re dealing with this sort of rag-tag group of men and women who, you know, don’t have the strong moral compass that, say, the Avengers do, or X-Men.”

Other mutants set to appear in Deadpool 2 are Cable, Russell, Domino, Negasonic Teenage Warhead, Black Tom Cassidy and Colossus, as well as other members of the X-Force team.

Deadpool 2 is set to be released May 16.

Cardi B and J. Lo work the pole in skimpy lingerie as Hustlers movie trailer is released 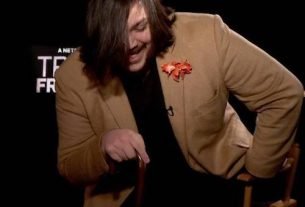