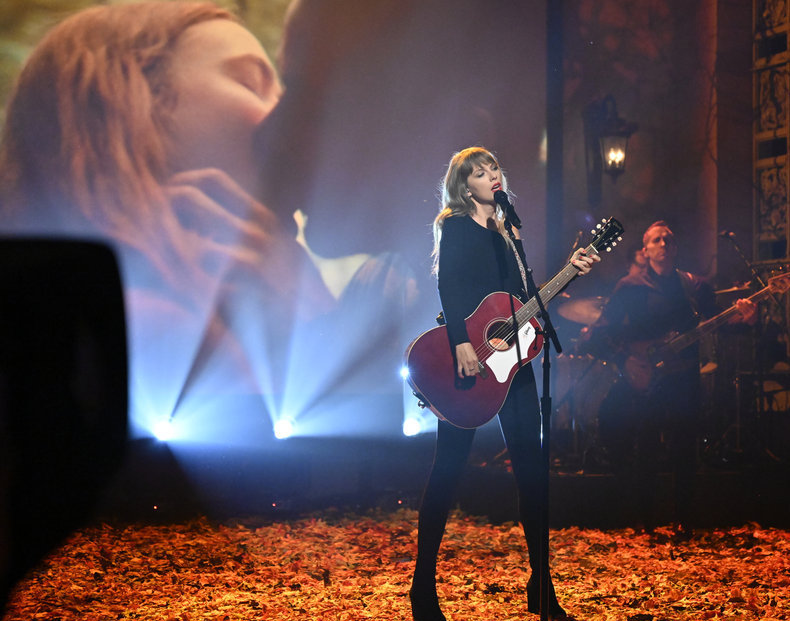 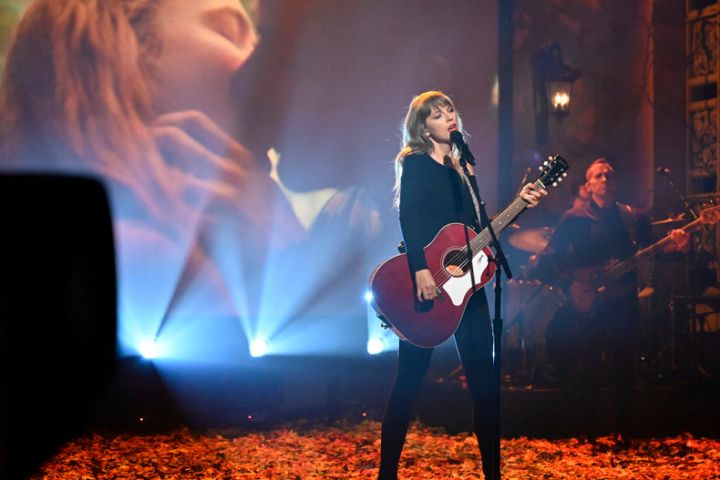 By Zach Seemayer, ETOnline.com. 2 mins ago

Taylor Swift stole the “Saturday Night Live” spotlight. The songstress took to the iconic Studio 8H stage over the weekend to deliver a stunning performance of the new 10-minute version of her song “All Too Well.”

Starting the number on a stage covered in autumn foliage, Swift crooned the tune in front of a giant screen playing the short film she made for the song, starring Dylan O’Brien and Sadie Sink.

Swift rocked a black body suit and a dark guitar for the simple-yet-gorgeous live performance, which also marked her fifth time as a musical guest on “SNL”.

As the performance progressed so did the elaborate set decoration, with the fall décor moving into a winter aesthetic, complete with falling snow.

Needless to say, fans were quick to take to Twitter to singer Taylor’s praises.

taylor swift on snl is my favorite genre pic.twitter.com/Dc0N73qLYI

Taylor really loves us, we gave us All Too Well (Taylor’s Version)❤ and now this beautiful and amazing performance😭👏🏻🧣❤ @taylornation13 @taylorswift13 #TaylorOnSNL pic.twitter.com/XkSJRwm5bR

Taylor Swift is one of the biggest artists of all time and tonight’s performance of ‘All Too Well (10 Minute Version) (Taylor’s Version)’ on SNL still felt like one of those career-making performances that takes an artist to a whole new level.

I am completely blown away…again.

Swift’s monumental performance wasn’t her only musical appearance on this week’s “SNL” either.

While her contribution to the sketch is brief, it is effortlessly hilarious and elevates the song to a whole new level.

Swift’s 10-minute “All Too Well” appears on her new rerecorded album Red (Taylor’s Version). This is the second album Swift has rerecorded, following the release of Fearless (Taylor’s Version) in April. In August, she revealed the 30-track list for the new version, which includes collaborations with Phoebe Bridgers, Ed Sheeran, Chris Stapleton and more.

Check out the video below for more.

Taylor Swift Debuts ‘All Too Well: The Short Film,’ a Cinematic Music Video Nearly 10 Years in the Making