Simone Biles marked her place in the history books once again after winning her seventh U.S. Gymnastics Championship! See fans’ reactions and what her beloved boyfriend, Jonathan Owens, had to say!

If there was any doubt about it, Simone Biles proved that she is the GOAT of U.S. Women’s Gymnastics. The Olympian, 24, won her seventh U.S. All-Around Championship during the United States Championships over the weekend. Simone executed each part of her routines with precision, and brought an effortlessness to her showcase, totally flooring her fans and loved ones.

Naturally, her longtime admirers took to social media to praise the champion’s efforts, and everyone was so impressed. “She’s just amazing,” one fan commented on the above video. “I half way expected her to do some double somersault with 19 twists to mount the bars. Silly me, she did that on the dismount.”

“When Simone is on fire, no one is anywhere near her level,” another fan commented on Twitter. “Even when she makes mistakes, it takes personal bests from the others to come even close. Truly a [GOAT],” the fan wrote, noting that Simone has seriously shown that she is the greatest of all time.

But it wasn’t just Simone’s fans and admirers who fawned over the athlete’s historic achievement. Simone’s boyfriend, Jonathan Owens, took to Instagram on June 6 and praised his beloved partner’s triumph. The football star, 25, shared an adorable photo of the two standing side-by-side, with Simone holding a flower from her beau. The caption to the post, however, was the best part of the tribute.

“What an amazing experience,” Jonathan began his Instagram caption. “First time getting to watch you compete in person and you didn’t disappoint. It’s so cool that I get to watch you do what you love, and be the best at that ‼️ I’m so proud of you my lil champ,” he continued, adding two cute heart emojis. “Trials up next and you already know I’m there!! Love you baby.”

Simone was so touched by the sweet tribute, and took to the comment section of Jonathan’s post to share her gratitude! “I love you so much,” she sweetly wrote. “I’m so happy you got to come watch while in the middle of OTA’s,” she continued, referencing Jonathan’s intense training camp. After adding two kissy-face emojis, Simone called Jonathan “a real one” for showing his support.

Although Simone just made history in her sport, she’s not even close to being done yet. The athlete is heading to Olympic Trials next, which take place at the end of the month. Simone looks like a pretty sure thing for the gymnastics team, leading the way to Tokyo for the United States. Fans have loved watching this incredible woman come into her own over the past few years, and we cannot wait to see the barriers she breaks and history she makes at the Olympics! 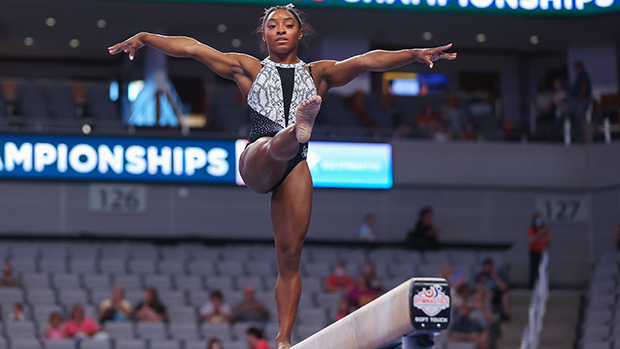 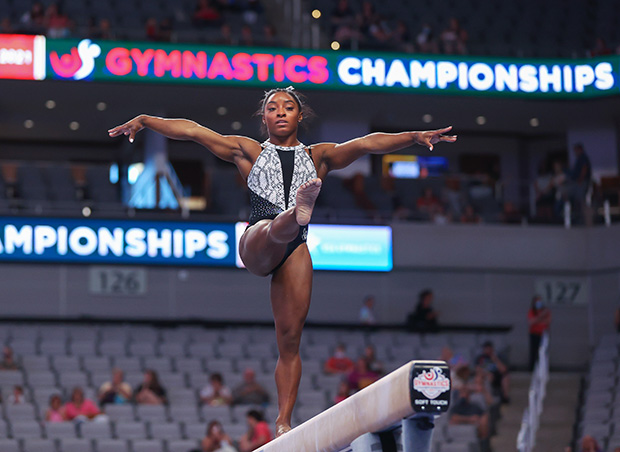 Royalty Brown, 7, Goes ‘One-On-One’ With Dad Chris For A Game Of Basketball — Watch