It’s less than a month into 2019 and it’s already looking like a huge year for the Marvel Cinematic Universe.

This year, Captain Marvel, Avengers: Endgame and Spider-Man: Far From Home are released.

After Thanos wiped out half of the population in Avengers: Infinity War, fans wondered how the story would continue.

But the trailer for Spider-Man: Far From Home, the first movie in Marvel’s Phase Four, has confirmed a pretty big plot point.

“There is a real commitment on our end to the stakes”

The movie is set after the events of Avengers: Endgame – despite the fact that Peter Parker was one of the Thanos’ fatalities.

That means that, somehow, during Avengers: Endgame, Spider-Man is brought back to life – but with what consequences?

The Russos already revealed there will be consequences, with Anthony telling Variety: “There is a real commitment on our end to the stakes. Yes, this is a fantasy world, and yes, remarkable things can happen in a fantasy world, but…”

With Joe finishing the comment, saying: “They come at an incredibly high cost.”

In the trailer, Peter and his classmates head to London during a summer holiday in Europe.

Of course, things don’t go smoothly and, soon enough, Peter dons his Spidey suit and gets to web-slinging.

It introduces the Elementals – a group of immortal humanoids with powers over fire, water, earth and air.

Viewers also get a glimpse of Jake Gyllenhaal as Mysterio, who fights the Elementals with Peter.

But will the unlikely duo manage to get the situation in London with the Elementals under control – or will Tower Bridge be lost forever?

British actor Tom Holland returns as Peter Parker, while ex-Disney star Zendaya is back as MJ.

Spider-Man: Far From Home is scheduled for a July 2019 release. 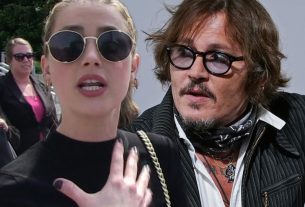 George Lopez Gets In Fight with Donald Trump Troll at Hooters