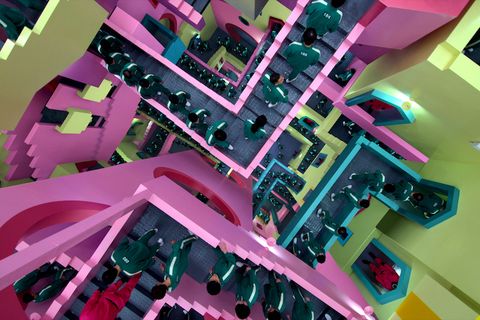 Spoilers below for season 1 of Squid Game.

Netflix’s newest K-drama hit Squid Game is, at face value, a spin on the Japanese classic Battle Royale. A group of strangers are placed in an enclosure, where they’re forced to kill one another if they hope to claim the carrot dangling before them: money, and lots of it. But unlike in Battle Royale and The Hunger Games, where the fighters are children forced into the arena against their will, Squid Game posits an intriguing morality shift: These participants volunteered.

To be clear, they volunteered for a game. Each of them down on their luck and pining for a life-changing payday—the prize is a $38.5 million check—each contestant is invited to a “survival competition” made up of seemingly innocuous children’s games. Seong Gi-hun (Lee Jung-jae) is one such unfortunate soul, encouraged to repay his many debts through a “high-stakes” competition. Desperate, he accepts, only to awaken in an eerily nondescript building, surrounded by hundreds of similarly confused contestants. They are rounded up to play a round of Red Light, Green Light. They sprint. Those who don’t screech to a halt in time are immediately gunned down.

If this sounds a little less cheery than your average Netflix binge, your instincts are correct. But Squid Game, which has been in development for more than a decade, is the kind of thriller that works because it uses its mind-twisting ethics—after all, what would you do in a fight to the death?—to stir conversation. Ever since its release on September 17, the K-drama has shot to the top of the Netflix charts and become the streamer’s most-viewed series in history. We could spend hours dissecting why exactly this show has captured the world’s attention, but it ultimately boils down to Squid Game‘s remarkable use of its haunted characters. So, naturally, fans are eager to watch them return. As viewers devour the first nine episodes, here’s what we know about a future for Netflix’s latest and greatest success story.

Will Squid Game get a season 2?

The first season closes with something of a resolution, depending on how you choose to interpret it. Gi-hun has won the Game and is now processing the trauma of what he’s done, only to discover that the old man he befriended during the course of the competition was, in fact, its creator. Alas, betrayal on the grandest scale.

After this man dies, Gi-hun learns the Game is still ongoing—he witnesses a candidate get recruited—and vows to stop it once and for all. We could choose to interpret this as the writers tying a bright bow on the finale, or it’s possible they meant to fuel speculation for a second chapter. Right now, we’re leaning toward the latter theory, in no small part because the show’s creator, Hwang Dong-hyuk, hinted that he’s already thinking about making a season 2.

“I almost feel like you leave us no choice,” he told the Associated Press about whether a second season is due, after obsessed fans across the globe have been clamoring for more. “There’s been so much pressure, so much demand and so much love for a second season.”

But as of right now, the story is in its preliminary stages. “It’s in my head right now,” Hwang added to AP. “I’m in the planning process currently. But I do think it’s too early to say when and how that’s going to happen. So I will promise you this, Gi-hun will be back and he’ll do something for the world.”

Hwang had previously shared that he was so exhausted after making the first season, he wasn’t even thinking of extending the story. (K-dramas don’t usually go on for multiple seasons.) “I think I do have the obligation to explain it to the fans and I’m thinking about season 2, but at the time, I was so tired after finishing season 1, I couldn’t really think of season 2,” he told IndieWire. “But now that it’s become such a big hit, people would hate me if I don’t make a season 2, so I feel a lot of pressure and think I’d have to.”

If he were to move forward with another season, however, he says he’d eschew his typical solo approach and bring in help. “If I were to do it, I would certainly not do it alone,” Hwang told Variety. “I’d consider using a writers’ room and would want multiple experienced directors.”

Assuming Netflix cashes in on a sure-to-be-successful season 2, it’s likely Lee Jung-jae would return as Gi-hun. But because so many other characters died—thus is the nature of a battle royale, after all—we’d almost certainly get a new supporting cast, perhaps joined by a few cameos (in flashbacks or otherwise) from our old friends Park Hae-soo, Oh Yeong-su, and the beloved HoYeon Jung.

What would a second season be about?

If Squid Game is to return, it’s likely the plot would focus on Gi-hun’s quest to end the Game, much like Katniss Everdeen’s saga centered around her revolutionary efforts to stop the Hunger Games and restore equity to the districts. What remains unclear is if this noble pursuit would land Gi-hun himself back in the arena, or if Squid Game would pull a Westworld and draw its characters out of the simulation and into the larger dystopian reality. All we know from Hwang for sure is that Gi-hun will return—we just don’t know how.

For his part, Hwang has plenty of ideas. “It’s true that season one ended in an open-ended way, but I actually thought that this could be good closure for the whole story, too,” he told The Hollywood Reporter. “…But there are some other stories in the series that have not been addressed. For example, the story of the police officer and the story of his brother, The Front Man. So if I end up creating season two, I’d like to explore that storyline—what is going on between those two brothers? I could also go into the story of that recruiter in the suit who plays the game of ddakji with Gi-hun and gives him the card in the first episode. And, of course, we could go with Gi-hun’s story as he turns back, and explore more about how he’s going to navigate through his reckoning with the people who are designing the games. So, I don’t know yet, but I’ll just say there are a lot of possibilities out there for season two storylines.”

He later added that, despite the enormous pressure from fans begging for a second chapter, he’s choosing to see the adoration as a source of inspiration. “Because of all that pressure, I haven’t decided yet whether or not I should do another season,” he said. “But if you look at it in a positive way, because so many people loved season one and are expecting good things for season two, there are people everywhere in the world offering their opinions about where the show should go. I could actually pull ideas from fans all around the world to create the next season.”

We have few other clues to go on just yet, but with all the fervor surrounding this series—and the rise in K-dramas in general—there’s little doubt we’ll have more news soon. 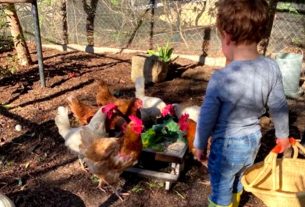 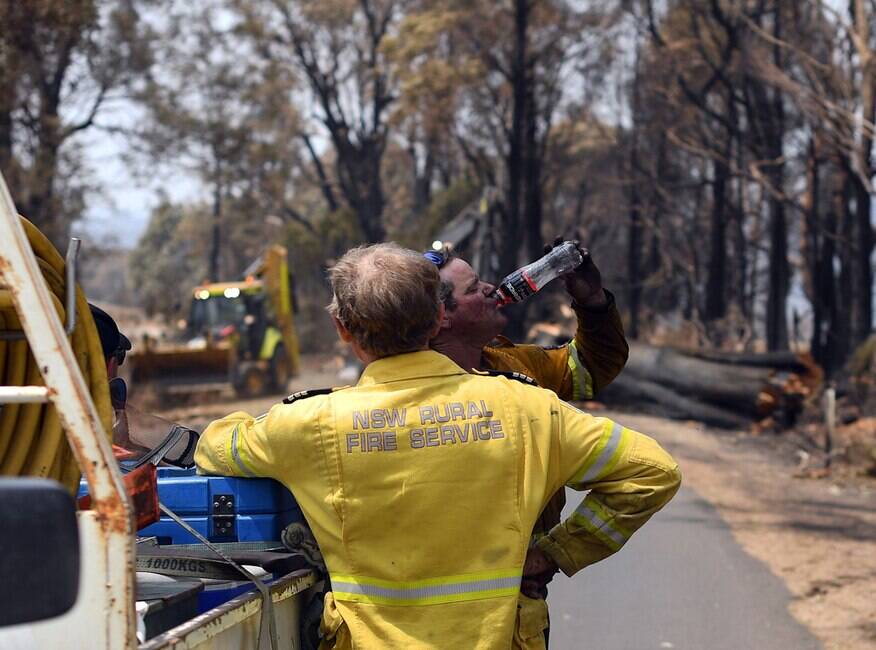 Feel Good Friday: This Week’s Stories That Will Make You Smile 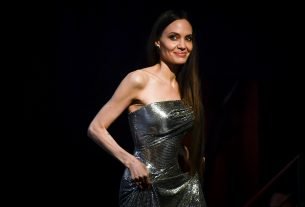