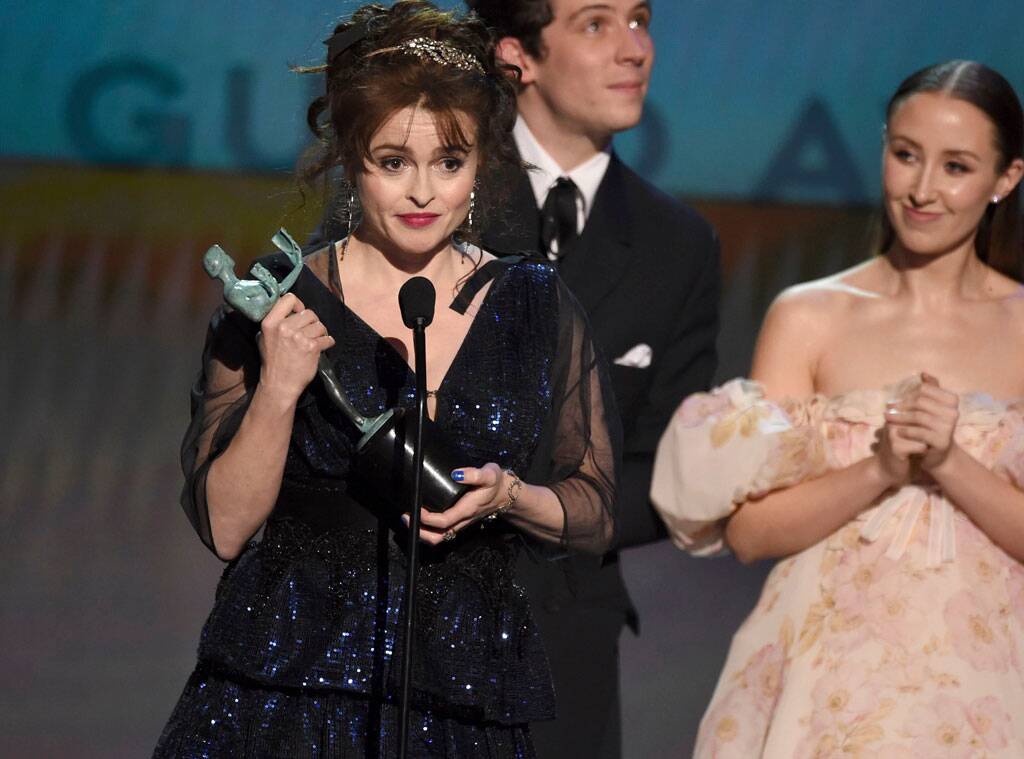 The Crown finally experienced coronation by the Screen Actors Guild.

After two years spent walking away empty-handed simply as nominees in the Outstanding Performance by an Ensemble in a Drama Series at the SAG Awards (and one year off), Netflix’s historical drama was awarded top honors on Sunday, Jan. 19 for its transitional year, which saw original stars Claire Foy, Matt Smith and Vanessa Kirby replaced with new stars Olivia Colman, Tobias Menzies and Helena Bonham Carter as the show followed Queen Elizabeth into middle-age.

On hand to accept the Actor on behalf of her cast was Bonham Carter. Flanked by co-stars Josh O’Connor and Erin Doherty, the erstwhile Princess Margaret began her speech by addressing her son Billy Raymond Burton. “My son’s here and, you know, obviously winning doesn’t mean anything, Bill. It’s about the partaking,” she stressed, before admitting. “It’s so nice to win.”

After checking with her co-stars to see if they’d like to speak, she continued, “I’m sorry there are only three of us here. There are actually 249 members of The Crown cast but we couldn’t all come here. And we’re all working, like, tomorrow so we’re leaving in about five minutes. But thank you so much. Obviously, we’re all here because of other people’s really good work. I think it will be nice to thank Nina Gold who cast us and obviously, we wouldn’t be anywhere without the words. So, [Peter] Morgan. Thank you for his genius. And Left Bank, Netflix.”

She concluded with a few words about just what a dream job acting on the historical drama is. “It’s the most fun job and I’m amazed that we get a prize on top of the the fun-ness of doing it. And it’s our privilege to be on this great show. I’ve had the time of my life, I think we all have. And it’s really as good as it gets, this show. I really recommend it, if you want a job. It’s amazing how well produced this and it’s because of Suzanne Mackie and Andy Harrie. I would thank everybody else but they’re all asleep at home, so there’s not much point. And Netflix, I love you very much. Lots of love. Thank you.”

To take home the top honor, the show beat out some stiff competition that included the casts of Big Little Lies, Game of Thrones, The Handmaid’s Tale and Stranger Things.

The Rapid Rise and Stunning Fall of Roseanne