There’s a telling scene in Hulu’s new docuseries The Curse of Von Dutch: A Brand To Die For, in which pop icon Whitney Houston arrives at the brand’s flagship store and departs with dozens of logo-adorned products, all gifted to her for free. It’s the early-aughts, nearing the peak of Von Dutch’s feverish strangle-hold on the fashion industry; the Americana brand was worn by just about anyone with tabloid sway. Paris Hilton, Nicole Richie, Britney Spears, Halle Berry, Jay-Z, Hilary Duff, Justin Timberlake, and Leonardo DiCaprio were all, at one point or another, spotted in the notorious trucker hat.

As The Curse of Von Dutch reveals, the brand’s explosive popularity amongst young A-listers was largely spear-headed by fashion entrepreneur Tracey Mills, a scrappy networker who knew the surest way to get Von Dutch in the hands of buyers was to get it in the hands of icons. His strategy worked, until it backfired: When Christian Audigier (of eventual Ed Hardy infamy) was brought in to steer the brand, he stamped the Von Dutch logo on so many products—and on so many celebrities—that its cultural currency lost all value. The company tumbled and has been something of a Y2K relic ever since.

Ironically, of course, that’s not the wildest story The Curse of Von Dutch has to offer: The real draw is a tale of murder, in which one of Von Dutch’s several self-proclaimed creators killed a friend in his own apartment. I won’t spoil who or what, precisely, spurred the crime, but the seedy drama surrounding drug-dealer-turned-designer Mike Cassel, art collector Ed Boswell, surfer-businessman Robert “Bobby” Vaughn, investor Tonny Sorenson, and French designer Audigier is fascinating to watch unfurl. The series attempts to cover a lot of ground in three episodes: It probes concepts of “selling out” and “influencer culture” while interweaving a cautionary tale of drugs, greed, and ego in an all-too-corruptible industry. But some of the most meaningful bombshells arrive in the final episode, which asks perhaps the most poignant question: What does a fashion brand actually stand for? And what does it mean when we, as consumers, tie our identities to that ethos?

To untangle these issues, The Curse of Von Dutch director Andrew Renzi agreed to discuss how the docuseries came together—and why he feels that, despite Von Dutch’s apparent resurgence in pop culture, he’s not convinced the brand is due for a comeback.

Where did your interest in this project stem from?

IPC, the production company behind this, told me about this idea, and once I heard about the characters that surrounded this company, I was so sold on it.

This is such an embarrassing story, and I kind of hoped it would never come out, but when I moved to L.A. when I was 18 years old for a summer, I actually got stopped in the street and modeled a Von Dutch hat for some money. So, this was a full-circle [moment]. I was very much like, “I have to do this.”

Did you know anything about this story before you got involved?

Zero. I knew the Christian Audigier, Ed Hardy connection to Von Dutch. I was aware of the latter years of the company, when it became what we know of it today: the bedazzled, really over-the-top brand. I knew the negative connotation the brand had, that it was a brand that burned out really quickly. But I had no clue there was a story that predated that. I didn’t even know that Von Dutch was a person, to be honest with you.

There’s such a huge cast of characters involved in this saga. And so many of them are central to the narrative. How did you juggle all their respective versions of the story?

I’m still juggling that. That is the biggest challenge, but also probably the most fun part of documentary filmmaking for me: I get to spend days in a trailer with Mike, and then I get to spend days in a car museum with Tonny. I don’t look at any character in this show as a bad guy or the good guy. So the hardest part, for me, was feeling like I needed to create a balanced narrative that gave them all respect but also didn’t let them off the hook.

Why revisit this story now? Von Dutch hasn’t been a major news-maker for a number of years. What was the impetus to look back?

There’s a couple answers to that. I’m a sucker for nostalgia, just in general. I’ll be the first to admit that, when someone said, “You wouldn’t believe the story behind Von Dutch,” I was like, “Hmm. Von Dutch. I never thought I would ever hear that name again.”

Also, there’s a really beautiful and cautionary tale at the heart of this about the perils of business, the perils of being creative, and also substance abuse. You’re just like, “This is so much bigger than this trucker hat.”

Having spent a year immersed in the psychology of this brand, I’d love for you, if you can, to pinpoint what went so wrong with Von Dutch as a cultural product. How did its mythos evolve into something that lost all meaning?

It is the story of that brand, where I think they started out when you have Mike Cassell and—even when Tonny came in to partner with Mike—there was this idea of this romantic vision of Americana. “We’re going to be Levi’s; we’re going to be high-end jeans, hard denim, work wear, James Dean. It’s going to be very specifically a simple heritage brand.”

Frankly, Christian was kind of an amazing businessman as well. He went in there, and he just bulldozed everybody. Fortunately or unfortunately, however you look at it, [the brand] started selling and people started buying it. Then, I think, the tipping point was, Tracey and Caroline [Rothwell, VP of international marketing at Von Dutch] and the whole team were so good at getting people to wear it. They were doing influencing before that was even a thing. They were like, “Let me put this hat on every single celebrity that exists. Then, when people get their Us Weeklys once a week or once a month, they’re going to see this hat and they’re going to want it.”

Unfortunately, they just went too far. Every opportunity that came their way, they said yes to, and so then you see it on dogs, you see it on children, you see it everywhere. You can’t sustain that way. It burns too fast, too hard.

You mentioned something interesting there—these celebrities were “influencers” before that was even a term. Back in the early-aughts, celebrity still had an aura of mystery. Do you think Von Dutch’s campaign was a start of this concept of “influencers,” where celebrity has since lost much of its exclusivity—and, to some degree, its power?

I do believe that. I mean, you’d be hard-pressed to find another logo brand like Von Dutch that was as iconic as Von Dutch was for that period of time. I mean, you would see that hat on Leonardo DiCaprio. You know what I mean? It was such an iconic symbol of that time period. [The Von Dutch team] were like, “We have a logo brand; let’s make value out of that currency, and let’s get people to come in.” I think they were ahead of their time in a lot of ways with that. I mean, Tracey was really, really, really ahead of the time as a marketer.

Speaking of Tracey, I have to ask about that scene at the end, where he learns for the first time that the real-life Von Dutch self-identified as a nazi and racist. I’m curious why that was something you waited to address until the very last episode. Why not filter that through the rest of the project?

It’s something I wrestled with quite a bit. It’s such a bombshell revelation, and I didn’t want it to overshadow the character journeys. I’ve always looked at this show kind of like Pulp Fiction—it’s this whole universe of Von Dutch, and there’s all these little pieces that go into making it, but it all connects somehow.

At the end of the show, especially experiencing the moment with Tracey that I experienced, it always felt like the most poignant thing to leave people with. It was always the thing where I was like, “Let’s hold out on it.” Because it also isn’t the point; I didn’t want [the show] to be about who Von Dutch was and whether he was this or that. But I do think it makes you think more [about the face behind a brand] than you probably would’ve otherwise.

Do you think Von Dutch could make a real resurgence today?

It’s so complicated for me. Because, from a personal perspective, I probably won’t be caught dead wearing Von Dutch, unless it’s my Halloween costume next year. But then I go back to the Tracey moment. I would be so super supportive of it coming back when I hear him say stuff like that, where it’s like, “Maybe I’m brought in to be able to change this brand.” I’m super supportive of that. Who am I to say like, “No, don’t take control of that brand and make it your own message now?”

But the flip side of that, for me, is I’m really connected to Mike and Bobby and their stories. If that brand were to become the biggest brand in the world [again], that would be heartbreaking for them. I just hope that if it does make a resurgence, it’s with the right people at the helm.

I’m probably making a logical leap here, but I have to ask: Someone in the show mentions that a murder within the fashion industry sounds like a crazy idea. But there’ve actually been a handful of notable murders in fashion: Think of Versace and Gucci. So, with Von Dutch as another on the list, is there an actual pattern here?

I think that fashion, in general, tends to attract explosive personalities and explosive people. There’s a shadiness to fashion. I think it attracts personalities that feel like they can get into a business and really make it pop. I mean, it’s a manic business—there’s money being printed, and you kind of never know how much money should be getting paid out. From what I learned about this [Von Dutch] story, it just felt everybody was stealing from everybody all the time.

I think that that is probably pretty indicative to the business as a whole. I mean, I was watching that trailer for the Gucci movie that’s coming out and I’m just like, “Here’s another, this is so cool. I can’t wait to watch this.” It just feels like everyone’s just deceiving everybody else and stabbing them in the back, and I don’t know, unfortunately that seems to be kind of the way of that world.

I feel like with fashion, the whole point of it is to create iconography, so I think, as a result, people get obsessed, and it creates obsessive personalities. The Versace story is a great example. Fashion is meant to make people obsessed over it—as a result, you get unpredictable behavior.

What will your next project be about? Another murder in fashion?

Right now, I’m up in Big Sur, which is really cool, because I’m going to Antarctica next week. I’m climbing the highest peak in Antarctica for a project I’m doing for Netflix. It’s sort of another nostalgia story from the ’90s—about a lawsuit against Pepsi. 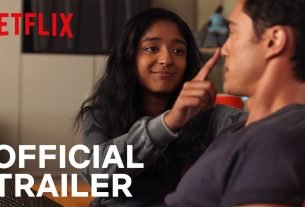