Get ready to go back to The Flash of the past.

The 100th episode of the CW series, which airs tomorrow, takes Barry (Grant Gustin) and his daughter Nora (Jessica Parker Kennedy) on a trip through the history of the show, revisiting old baddies and big moments from over the course of the past five seasons. We’re also about to finally get to see this year’s big three-show crossover, which debuts with next week’s episode of The Flash, and to celebrate, we hit up the cast before their 100th episode celebration to get some teases on what’s to come.

Specifically, we got the gang to guess what face people will be making after they see the 100th episode, and they almost nailed it. If you ask us, they could have looked a little more dumbfounded. We had to watch it multiple times and we still had to get the cast and EP Todd Helbing to clear up a couple things. We might just be dumb, but there’s a whole lot going on.

One of the best revelations to come out of this game is the fact that we’re going to get to see what Iris is like in the future, when we know she’s made some hard decisions in the wake of her husband’s disappearance. While we don’t yet know exactly when we’ll meet future Iris or what future she’ll even be from, it’s good to know it’s coming! Also curious to note that no other cast member could promise we’d see them in the future. Unclear if that’s good or bad, but it’s definitely good to know!

The cast also dished a bit on the Elseworlds crossover, which begins next week, and EP Todd Helbing promised some important Barry and Iris moments to come. Hit play on both videos above, and stay tuned for more coverage of both the 100th and the crossover!

The Flash airs Tuesdays at 8 p.m. on the CW. 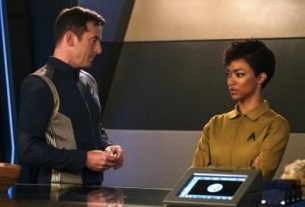