Ellie Ferguson has been crowned the winner of The Greatest Dancer, the first series of the BBC One dance competition.

The youngster was left speechless and instantly placed her head in her hands to mask her tears when the news was announced.

Ellie, a solo act, was mentored by professional dancer Oti Mabuse during the last seven weeks and the pair hugged it out as they both teared up.

While Oti had two acts in the final, KLA and Ellie, Cheryl and Matthew Morrison had one act each – James & Oliver and Harry and Eleiyah.

Fans rushed to Twitter to congratulate Ellie, one gushed: “Oh my God! Congratulations Ellie. I’m so proud of you!”

A second wrote: “She did it!! Fantastic Ellie!!”

Another said: “Ellie was The Greatest Dancer from her first appearance on the show. She was head and shoulders above everyone.”

Other viewers were distraught that Cheryl’s act, Harry and Eleiyah, did not win the competition.

One hit out: “Harry and Eleiyah should have won and they would have if they didn’t end up looking like background acts in a Cheryl music video.”

Another wrote: “So happy for Ellie but gutted for Harry and Eleiyah.”

A third said: “I really thought Harry and Eleiyah were going to win.”

But some viewers were more shocked by a series two of the BBC One show being aired.

After the show, an advert played encouraging dancers to sign up for the chance to win the next series.

One Twitter user wrote: “Back for another series. Didn’t see that coming.”

Another gushed: “So glad The Greatest Dancer is getting a season two. Yes lads.” 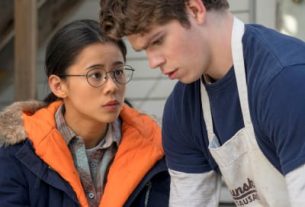 The Half of It Review: A Different, Refreshing Take On a Coming Of Age Love Story!