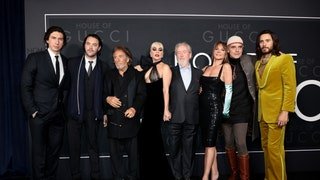 House of Gucci is a fashion movie, which means it was all but guaranteed a rollicking red carpet rollout.

And the film’s stars are currently out on the press circuit ahead of its November 24 wide release, with full-cast premiere stops in London last week and another in New York Tuesday night. While Lady Gaga (who portrays Gucci family interloper Patrizia Reggiani) is  in her element, cavorting in various designer gowns, her male co-stars seem…up to something? Adam Driver wore deeply normal suits to both premieres, in peculiar contrast to the rest of his castmates. Real-life Gucci figurehead Jared Leto, on the other hand, wore two different colors of the same velvet Gucci suit, which still seems like a lot, even if a colorful velvet suit is the red carpet uniform du jour. And then there’s Jeremy Irons, who’s pulled up in two absolutely enormous, presumably self-styled, borderline-steampunk fits. Are they playing menswear mind games with us?

Check out the red carpet looks to see for yourself—and maybe together, we can get to the bottom of this.