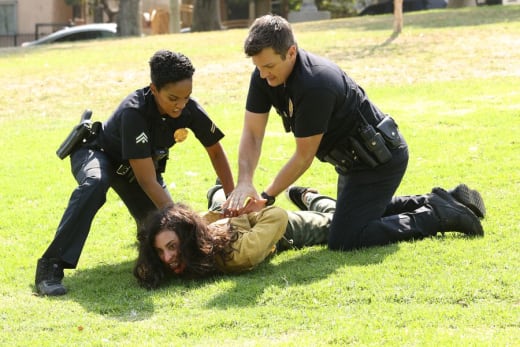 Things get spooky on The Rookie Season 4 Episode 5, which was one of the best of the season with its cheeky Halloween theme!

The team had more than they bargained for, from zombies to ghosts to an accidental switcheroo this Halloween.

However, it was rather creative and realistic how the show decided to tackle a Halloween episode with a designer drug akin to the side effects of bath salts.

However, it was disappointing that they didn’t explore the spread and adverse effect on casual users beyond the seizure and compulsion to cannibalize.

Perhaps that would be too dark for this sort of show.

A wonderful surprise was Pete Davidson’s return as Nolan’s half-brother; it brought a much-needed lightheartedness to the show.

Not that the show isn’t always cheeky and lighthearted. However, perhaps it could bring in a broader audience with Pete’s humor.

The highlight was watching Pete become a confidential informant for a hot minute. I would watch a spinoff of that for sure. I’m not sure about the rest of you, though! Let us know what you think.

Be careful because it’s Halloween… and Halloween is unpredictable

Grey warned the team early on that anything could happen, though we don’t think anyone prepared for the rollercoaster of events we had in store.

That feeling represented itself by the acronym, ACH, which, honestly, could’ve just been an onomatopoeia, and it would not have been surprising. 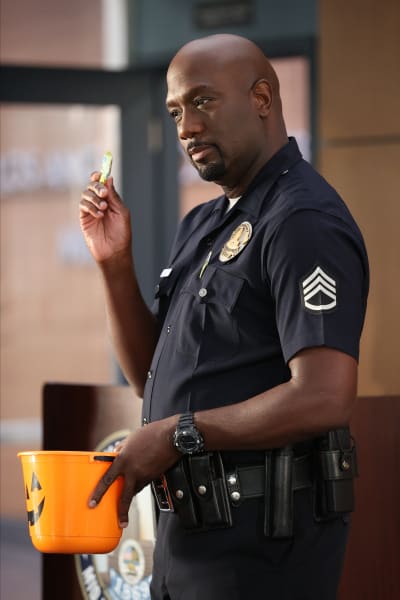 Halloween seems to be the LAPD’s wild and most chaos-filled night.

That makes sense due to how busy the city is on a regular day, let alone one of the most prank-filled nights of the year. So how many civilians would call in false calls and pranks?

Thorsen was nowhere to be seen. Therefore Harper and Nolan got to be paired up again. It was refreshing to see the two of them in the same patrol car after so long. They’ve always had a good dynamic; seeing it mixed in with Pete Davidson was comical.

Harper seemed to have troubles of her own, considering it was implied that she slept with her ex-husband. 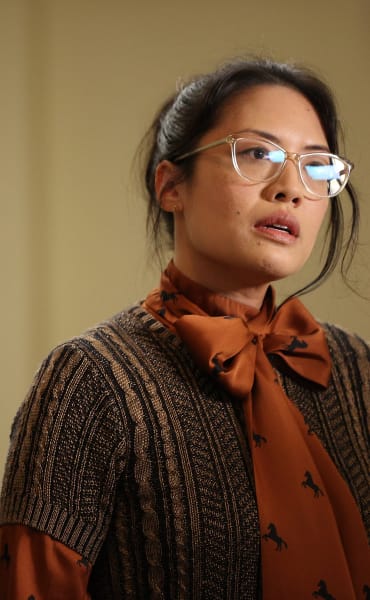 That was after a night out with him and their daughter. As a geek, the Star Wars-themed costumes were much appreciated and respected. May the force be with Harper!

If you get dispatched to a large party… make sure they know you’re not the stripper.

Throughout all the characters, there was a significant discussion about children from many different perspectives.

It was angering that Chen’s mother decided to go ahead and make an appointment for something her daughter had no intentions of pursuing.

While it’s a great measure to ensure you still have a chance to have your child if something happens, her mother should not have had access to that! Also — as a 29-year-old, wouldn’t that be pretty damn offensive to receive a call? 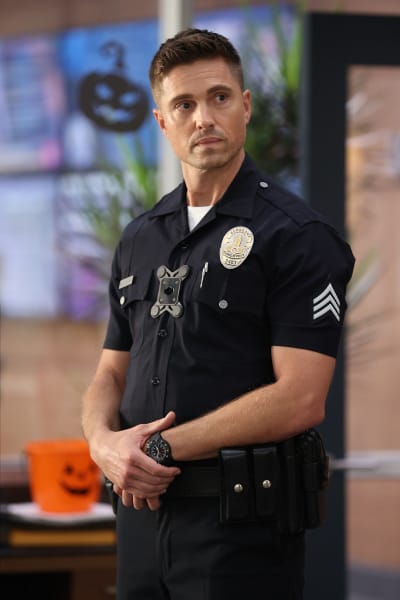 The choice from her mother earns us another cherished Chenford moment. However, it’s easy to think that all this talk of children means that The Rookie must have another pregnancy or adoption plot along the way.

Another golden Chenford moment was the two investigating a supposed abduction that slowly turned out to be a case of a switcharoo.

Unfortunately, both victims wore the same costume with the hood over their face, so it’s difficult to see.

It clearly states in the Bro Code… number seven! When a girlfriend asks where your bro is, you don’t tell her!

As for ghosts, a familiar face on television pops up for a guest appearance to provide the services of a ghost hunter. Unfortunately, TJ Thyne and his colleague ended up scamming Chen’s elderly neighbor for at least $5,000. 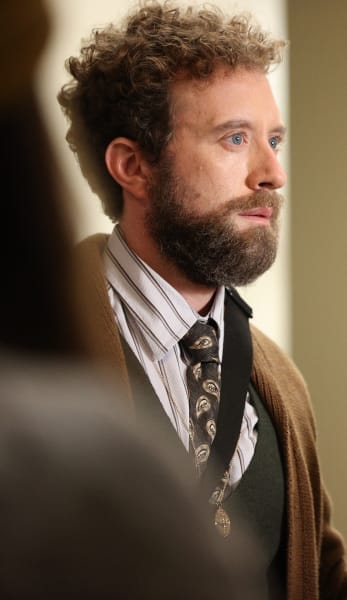 After a failed attempt at getting more money out of Ms. Crouch, Chen gets Lopez to investigate the “ghost hunters.” We could only wish to have neighbors as caring and friendly as Tamara and Chen.

Hilariously, just as Chen predicted, it wasn’t a ghost haunting their apartment complex after all. But, of course, this was after Lopez had already scared the socks off Tamara. It’s full of the history of the building — though we would instead take ghosts over a creepy squatting stalker.

Chen: We have to talk about birth control and stuff…
Tamara: I’d rather be possessed!
Lopez: Take it back!

Chen is brave just entering a random passageway she found behind her bathroom mirror — maybe that’s what makes her such a good cop? 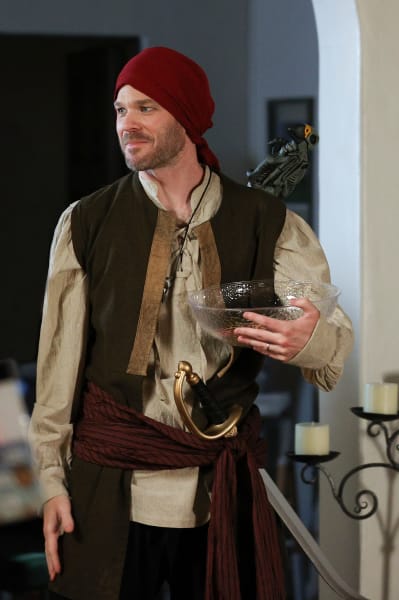 She had a badass fight scene against the apartment complex’s resident Peeping Tom. Seeing her fight with just a broomstick and hold her own against him was exciting! For sure, a highlight of the episode.

There wasn’t much mention of plots from previous episodes, though it made up for the plot holes with the entertainment factor. As a result, I could say that this was the most enjoyable episode of the season!

Wouldn’t it be a dream if all shows could have half a season to have fun with Halloween plots? Yes? No? It could be just us here at TV Fanatic, who knows!

As mentioned before, it was a shame that the show didn’t have the guts to continue showing the potent effects of this designer drug. 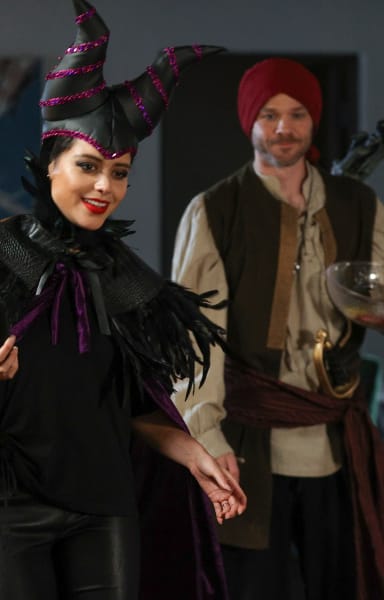 Perhaps this was a case for the DEA in the long run, anyways — let’s hope Nolan, Bradford, and Pete get credited for all their work in the undercover operation.

What costume would you rather see Nolan wear? Unfortunately, a disappointment to an otherwise great time was the lack of Nathan Fillion dressed up in a costume!

To catch up on the shenanigans, you can watch The Rookie online with TV Fanatic.

Tell us all your thoughts on this spooky special of The Rookie! 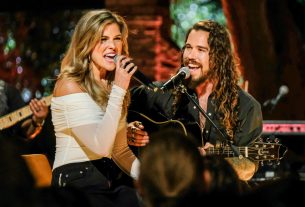 ‘The Bachelor: Listen to Your Heart’ Episode 3: Let the Performances Begin (RECAP) 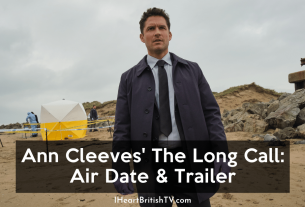 Where to Watch The Long Call in the US + Premiere Date