For many—this writer included—autumn is associated with a specific strain of New York romantic comedies, especially those from Nora Ephron’s oeuvre. The late writer’s most beloved films basically treat fall foliage and cozy knitwear as secondary characters—especially 1989’s When Harry Met Sally, which has earned its status as both a top-tier rom-com and also A Great Fall Style Movie. But Ephron doesn’t have a stranglehold on cozy-clothing cinema. And while you might not think of the Ben Stiller 2000 comedy Meet the Parents as a legendary fall style film, well: you’d be mistaken. Today, the movie stands as a timeless snapshot of autumnal men’s fashion—a bizarrely prescient reflection of modern-day menswear.

The movie doesn’t immediately announce itself as being chock-full of sophisticated and classic style. Stiller’s Greg Focker is a Chicagoan dressed in run-of-the-mill, turn-of-the-millennium metropolitan attire. He dresses like a Gap guy, basically. It’s only when Greg and his girlfriend, Pam Byrnes (Teri Polo), head out east to meet her family that the sartorial ante is upped. You probably remember the rest: the airline loses Greg’s luggage, which means that he’s forced into clothing borrowed from Pam’s overprotective father Jack (Robert De Niro) and her pot-smoking younger brother. The Byrnes family live in a well-to-do part of Long Island and dress the part, opting for a truly classic take on East Coast style—right at the spot where the fall catalogs of Ralph Lauren and L.L.Bean meet.

“We wanted it to feel timeless,” explains Daniel Orlandi, the Emmy-winning costume designer who worked on the film. “It was a lot of Brooks Brothers and Paul Stuart. They’ve been making these clothes for decades and the look hasn’t really changed.” For Orlandi and the director, the concept of the movie is pretty relatable—everyone has met the parents—and the wardrobe should follow that lead.

The dinner scene in which Greg offers up a slam poem-like prayer and then accidentally smashes the ashes of Jack’s dead mother all over the floor is best remembered for its antic level of cringe comedy. (“I’ve got nipples, Greg—can you milk me?”) But watching it recently, I was most struck by Greg’s certified Fall Fit. He wears an olive turtleneck sweater, black pants, and a particularly excellent flannel jacket. (Not unlike this one from Aimé Leon Dore.) The look is pulled entirely out of Jack’s own closet and sets the tone for the quintessentially East Coast menswear that will be a visual constant throughout the rest of the film. Orlandi picked up that jacket from Purdey, a long-standing rifle company that also makes hunting apparel that had a store at Madison Avenue at the time. (He said he received gun catalogs in the mail for a decade after, but a small price to pay for such an excellent piece of outerwear.)

Other characters hit the same mark. Jack offers a powerful one-two punch of autumnal style in an earthy brown blazer paired with a burgundy turtleneck sweater (both from Paul Stuart), and later in a wool cap and leather driving gloves. Owen Wilson shows up as Pam’s ultra-wealthy ex-boyfriend, rotating in and out of enough cable-knit sweaters to make any fisherman jealous. (When Wilson first put on that sweater, he noticed the Paul Stuart tag and told Orlandi that his father got all his clothes from there.) Even Greg’s more dressed-down looks—like an athletic striped hoodie paired with blue jeans—still carry a zip of East Coast prep, like what one might wear on the way to lacrosse practice. Other characters are dressed in patterned crewnecks, suede utility jackets, camel overcoats, textured blazers, and turtleneck sweaters on turtleneck sweaters. Seriously: the knitwear wardrobe budget on this movie must have been out of control. Just about every staple of autumn-ready style makes an appearance by the time the end credits roll.

None of the fashion in Meet the Parents feels especially flashy or tryhard—a deliberate choice made by Orlandi and the director, which is probably why, 21 years later, it all still feels highly wearable. There are pleated trousers, chunky sweaters, chore coats, wool caps, and plenty of other heavy-hitting fall wares. “I wanted it to be timeless. I didn’t want it to be so trendy,” says Orlandi. “Sometimes you’ll see a movie that has a famous sweater from a Prada or Gucci collection and it immediately knows the year. I didn’t want it to have anything that touched on the fact that it was the year 2000.”

It’s hard not to notice the overlap with the current moment in menswear—especially as we’re smack-dab in the middle of fall. The look plays right into the wave of post-streetwear, New American style we’ve been seeing everywhere, with leading labels like Aimé Leon Dore and still-rising brands like Adsum offering heritage-inspired yet streetwear-inflected gear. So, if you’re in need of some style inspiration for this fall, maybe give this comedy a watch. If the classic East Coast look isn’t your thing, you’re at least in for some laughs—and you might learn what not to do the next time you meet a significant other’s parents. Hint: don’t spray paint the cat or accidently light the backyard on fire. Do wear a great sweater, though. 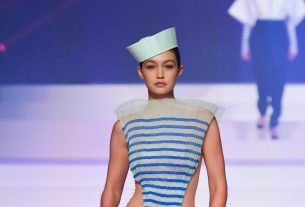