More than twenty years later, the fashion from Clueless remains our style goals.

Last night, as influencers from all over the world gathered for the #REVOLVEcarnival to display the latest trends, we couldn’t help but notice that one of the most popular looks is actually a throwback style, made popular by the fictional character Cher Horowitz.

In the hit ’90s film, Cher (played by Alicia Silverstone) and her BFF Dionne (Stacey Dash) enter their high school as the popular kids whose lifestyles deserve today’s hashtag, #Blessed. They’re wealthy, in relationships with equally popular guys and wearing the hottest clothes money can buy. Essentially, they fit the description of an influencer today.

While Clueless is filled with looks worthy of recreating, Cher’s most famous outfit is the yellow plaid skirt suit with knee-high socks. For a long time after the movie it was a go-to Halloween costume. Now, the print of her look is a fall staple.

Every Fall Outfit You Need to See From Revolve Festival

We also saw yellow plaid in street style with Bella Hadid, Emily Ratajkowski and Jessica Alba wearing the pattern in different ways. Bella wore a cropped button-down with high-waisted jeans. Emily wore a co-ord set, completed by a crop top and cigarette pants. And, Jessica wore a pattered midi skirt, pairing it with a leather jacket.

While Cher may have popularized the bright pattern, it’s evolved over since ’95. There are a lot more ways to style it, and the guests of the #REVOLVEcarnival are showing us how to do it.

Case in point: the Lovers + Friends Ellie Mini Dress, the most popular dress at the event. Three influencers wore the yellow and black plaid dress that features crossover back straps and small leg cutout, and paired it with either sneakers or black ankle boots.

We also saw the trend realized as pants and a jumpsuit.

So if you want to avoid being referred to as a “fashion victim” or “ensemble-y challenged” (in the words of Cher), add this trend to your fall look. All the cool kids are doing it. 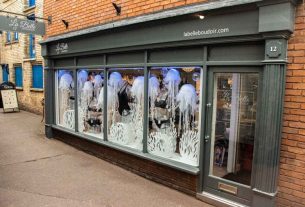