This Is Us just did a whole lot for this year’s Thanksgiving episode.

We saw how Jack got the necklace in Vietnam and we found out what’s up with Miguel’s kids and we saw how William and Jesse met and one of Randall’s kids revealed a secret and Randall and Beth had an argument and young Randall wrote a college essay and we felt bad for Miguel and Sterling K. Brown also just stood there in only his underwear for a sec.

It was a lot to keep track of, since nearly the entire cast and multiple time periods played a part in the episode in some way or another. Questions were answered, turkey was eaten, and we’re tired but full and pretty happy, to be quite honest with you.

Let’s dig into all the things we learned, shall we?

Jack’s Necklace Was a Thank You

Jack was given the necklace by the mother of a young boy with an infected cut on his foot. Jack took care of the boy (with no help from Nicky, who wondered why he should help a kid who was just going to grow up to kill Americans), and the mother gave him the necklace in thanks.

Nicky later explained himself, telling Jack that an old woman in a village had given away their position and had gotten his CO killed.

“You can be nice to them all you want Jack, but they’re not just women and children.”

We forgot Miguel even had kids until everyone in tonight’s episode started talking about them as if we always knew they were there. Their names are Andy and Amber (played by Yara Martinez, from Jane the Virgin), and they’re not huge fans of their dad, but they’re really not huge fans of Rebecca. They claim she stole their dad away from their mom, even though that timing’s wildly inaccurate.

As Miguel explained in his epic Give Rebecca Some Respect speech, he and Rebecca didn’t get together until 10 years after Jack’s death, long after Miguel and Shelly’s divorce, and long after Shelly was already remarried, and long after his kids had already started cutting him out of their lives.

It seemed like Tess’ big storyline this episode was her first period, which Kate helped her deal with. Kate got all excited about Tess getting to have her first kiss and her first boyfriend, and Tess added, “Or girlfriend…”

Tess asked Kate to keep her secret, and Kate said she would, but she encouraged the kid to tell her very loving parents, and this is a storyline we’re so here for this season!

Randall and Beth Are Struggling

Things aren’t bad, but they’re not good. The fact that neither of them have jobs is not great, and when Beth realized Randall only hired for her his campaign because she’s his wife, and not necessarily because she’s good at the gig. The whole thing is clearly weighing on them, and they didn’t look very happy at dinner.

You know what else is probably weighing on them? ALL THE LENGTHY TRIPS FROM NEW JERSEY TO PITTSBURGH. That’s a lot of road trips and gas money and time spent in a car!

William and Jesse Are Too Cute

No huge revelations here, but we got to watch William and Jesse meet and fall in love through meetings and jazz sessions and dinner dates, and it was nice to see those smiling faces again. 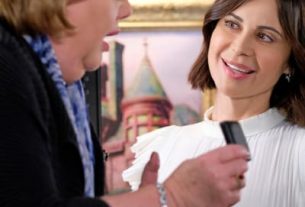