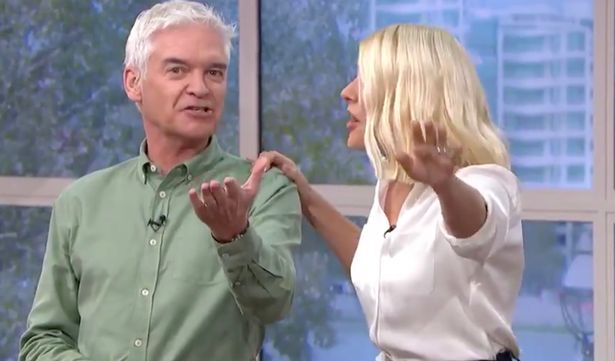 This Morning ‘s Phillip Schofield and Holly Willoughby were in hysterics as they spoke to reporter Alison Hammond.

She had been talking to them about interviewing Angelina Jolie and Elle Fanning about the new Maleficent film.

But Alison was forced to dash off set live on air as she had to rejoin her marching band, who had been helping her to announce the competition.

Phillip reminded her she had some presenting to do, causing her to quickly dash off the set to find her friends.

As she left some material on the sofa, Holly said: “Don’t forget your gloves.

Phillip joked: “Your knickers have come off.”

Alison was seen later in the show as she brought the marching band into the studio before showing the £500k prize money in notes.

Meanwhile, Holly suffered an on-air blunder as she struggled to read the autocue later in the show.

As she got competition mixed up with champion, she said: “Can I just say, can you see how far away that camera is?

“This is what is happening… it is a long way away, I can’t read it,” before blaming her eyesight.

This Morning replied to her on social media, saying: “We promise to move the autocue closer in future Holly.”

It continues tomorrow at 10.30am on ITV.