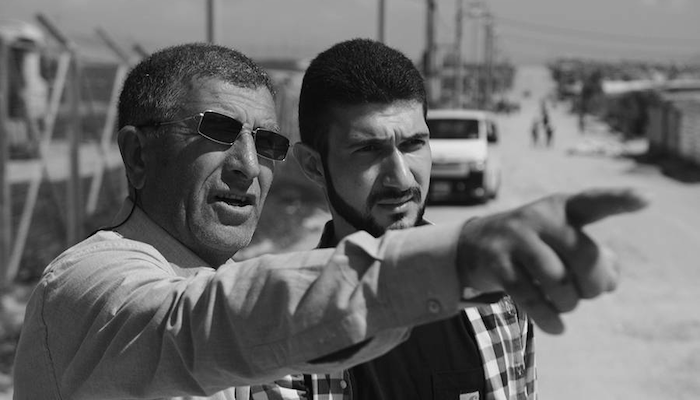 Alina Gorlova’s Personal Look at the Displacement of War

While war documentaries usually cover the politics or grand strategy of conflict, Ukrainian director Alina Gorlova‘s The Rain Will Never Stop to focus on the more personal side of war i through a family displaced by fighting in Syria and Eastern Ukraine.

Gorlova remembers when she first saw the wartorn region of Donbass on the border of Ukraine and Russia. “I saw this nature in black-and-white,” she says, “because there was a lot of slag heaps in these industrial landscapes.” A graduate of the Karpenko-Kary Kyiv National University of Theater, Film and TV, Gorlova’s previous work includes an ambient film Kholodny Yar about the titular region in central Ukraine. Her first feature length project No Obvious Signs takes a look at PTSD victims, following the struggle of a female soldier to reintegrate into society, which won four awards at the Docudays UA International Human Rights Film Festival in 2018.

Gorlova had only planned to film a short documentary in the Donbass region, which became the center of attention in 2014 when pro-Russian separatists began fighting the new Ukrainian government with the assistance of the Russian state. “I started to search for some protagonists,” she says. “My friend, a photographer, introduced me to Andriy Suleyman—he was first in a war in Syria, and then in another one in Ukraine, so it’s very important to understand that his two native lands were at war.”

The director said she also found it interesting that Suleyman had chosen to become a volunteer for the Red Cross rather than work a safe office job. “It’s like he was trapped by war, psychologically,” she said. “After meeting him, I understood that I could create one space between Donbass and Syria. The film then had to be in black-and-white because I understood that it would allow us to create rhymes between spaces.”

The drama does not only stretch between Syria and Ukraine but rather across the entire world, as the Suleyman family has been scattered in far off places including Germany and Iraqi-Kurdistan as well. In the film, Andriy Suleyman travels to each of these locations for weddings, funerals, and other family events. “I think at the start when Andriy agreed he thought it would take two to three months,” said gorlova. “After two years, he asked me, ‘When is filming going to stop?’”

It is clear that Gorlova isn’t interested in the politics of war but rather the kind of profound effect it has on the people who are displaced by it says Kaleem Aftab of Variety. “Gorlova is interested in these landscapes and war at a macro level. She doesn’t attempt to explain why these wars are happening or even who is fighting who.” Gorlova said “I was trying to be apolitical, partly because The Red Cross is a neutral organization, and from that standpoint, I had an idea that it would be good to be neutral in this film and not to judge anyone. Not to judge Russia and not to judge the Syrian government. I wanted to explore people’s desire to protect and to die for their country, for something.”

Leave your thoughts on Alina Gorlova’s interview below in the comments section. Readers seeking to support this type of content can visit our Patreon Page and become one of FilmBook’s patrons. Readers seeking more movie news can visit our Movie News Page, our Movie News Facebook Page, and our Movie News Twitter Page. Want up-to-the-minute notification? FilmBook staff members publish articles by Email, Twitter, Instagram, Tumblr, Pinterest, and Flipboard. This movie news was brought to our attention by Variety.

Bond Girl Kara in 'The Living Daylights' 'Memba Her?!