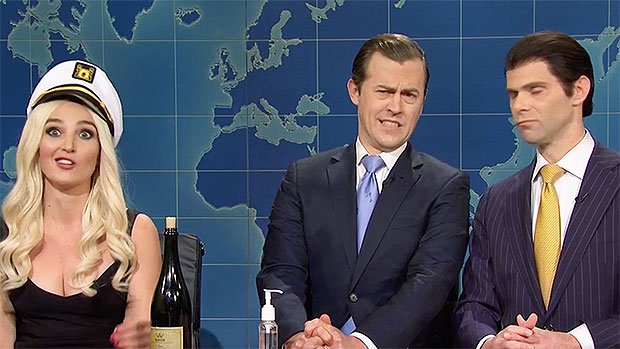 Chloe Fineman’s ‘Tiffany Trump’ was still in birthday mode despite ‘flack in the press’ in this hilarious bit on ‘Weekend Update’!

With just 2 weeks until the presidential election, the political sketches are on fire at Studio 8H! Chloe Fineman, 32, appeared as 27-year-old Tiffany Trump on Saturday Night Live‘s Oct. 17 episode. Chloe’s Tiffany popped in on Colin Jost and Michael Che’s Weekend Update fresh off a weekend of “maskless partying” in ritzy South Beach, Miami! “Well, you know — the media has been butt hurt because I was partying maskless in Miami with randoms on a boat,” she declared.

“But I’m a stepchild named Tiffany. It’s kind of my job to get faded on South Beach,” she quipped, sitting next to brothers Donald Trump Jr. and Eric Trump. It turns out that SNL‘s version of the first family hadn’t all had the chance to meet in-person! “Who’s that lady?” a confused Eric pondered. “That’s your sister, Eric! Wait, Tiff — I don’t know if you and your sister have met!” Donald Jr. realized, as Tiffany confirmed this was the case.

Colin wasn’t quite done, however, with inquiring about Tiffany’s pandemic party weekend — especially when dad Donald Trump, 74, just recovered from COVID-19. It turns out that Donald has always practiced social distancing — especially when it comes to his daughter with Marla Maples. “No, daddy has always taken the six foot social distance rule very seriously with me,” she hilariously explained, rocking a captain hat.

The season was off to a bang as Jim Carrey, 58, agreed to come on board as democratic nominee and former Vice President Joe Biden, 77, while Alec Baldwin, 62, returned as Donald Trump, 74. Alec has been playing Trump since before the 2016 election, and the current President has often taken to social media to criticize the actor. “Alec Baldwin, whose dying mediocre career was saved by his terrible impersonation of me on SNL, now says playing me was agony. Alec, it was agony for those who were forced to watch. Bring back Darrell Hammond, funnier and a far greater talent!” Donald tweeted in 2018.

While Jim has appeared as a host on SNL seasons past, season 46 would mark his most regular appearance on the NBC sketch series. “There was some interest on [Jim’s] part [to play Biden]. And then we responded, obviously, positively. But it came down to discussions about what the take was,” Lorne Michaels said to Vulture. “He and Colin Jost had a bunch of talks. He and I as well. He will give the part energy and strength, and … [Laughs.] Hopefully it’s funny…I honestly don’t think of them as celebrity cameos…I’m thrilled Jim is doing it,” he added. 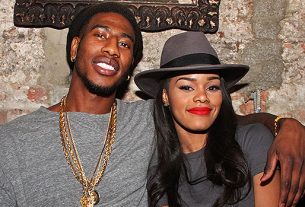