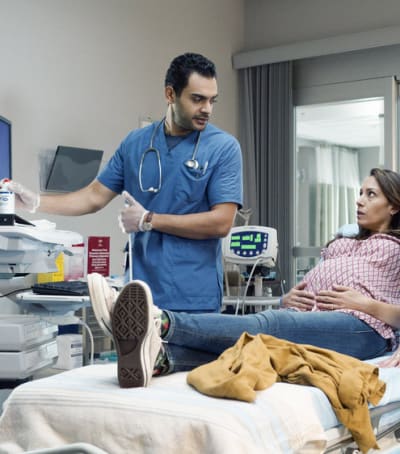 A mother nearly gave her life for her child on Transplant Season 1 Episode 8. To be frank, it was very surprising that Maria survived. I half-expected her to die on the table.

The Romero family’s storyline wrapped up in the best possible way. They chose to prioritize the baby, but both mother and child thankfully made it out alive.

Maria begging her husband to save the baby tugged at the heartstrings big time. It was the most powerful scene on the episode.

Javy: He’s asking us to choose between your life and the baby’s. We can’t do that. I can’t do that!
Bash: Not choose, Javier, just prioritize.
Maria: Save the baby.
Javy: Maria, but wait. Listn.
Maria: Save the baby.
Javy: Maria, let’s talk about this, okay?
Maria: I can’t lose this baby Javier. I won’t. You know what this means to me.
Javy: Okay, Maria, but you could die.
Maria: I love this baby. It’s already a part of me and I need to protect it. I need you to be strong and there for our baby, either way. And I need to hear you say it. I need you to promise me.

It makes sense, given what Javier told Bash, that Maria would prioritize the baby. She would have been devastated if she lived, but the baby died.

That being said, the alternative could have turned out terrible. Despite what he promised, there is a good chance Javier might resent their child for Maria’s death. That’s not a stable environment for a child to grow up in.

Amputation is hard to contemplate, but if the Romero’s had listened to Bash, they wouldn’t have had to risk it. They got lucky, and we as fans are grateful, but it could easily have gone the other way.

Like the Romero’s, our favorite doctors are having to make hard choices. Mags, for example, has to decide what kind of doctor she wants to be. She is questioning her tendency to try to fix everything possibly wrong with the patient. 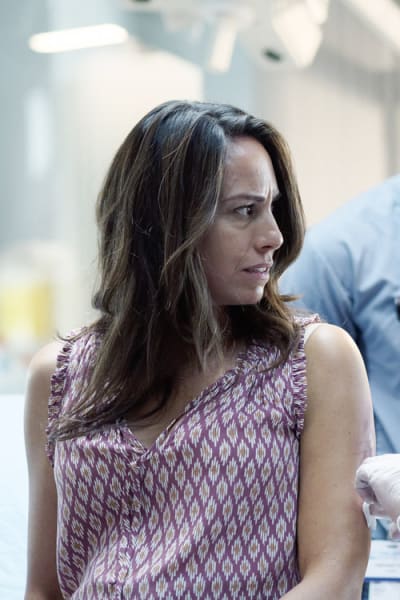 Bash: Are you okay?
Javy Romero: We tried to conceive for two years. Three failed rounds of invitro. I took a night job, Maria took extra freelance work, and every single time a cycle didn’t work, she would get the news, and it destroyed her. And then, and then it worked. We’re gonna have a baby. And now all I can think is, is it all worth it?

She’s always operated this way, but now Dr. Bishop is in her head, much as he claims not to be.

He’s usually a pretty likable character, and he tends to have a reason for why he does what he does. It’s easy to forget that this is the guy who initially wouldn’t hire Bash!

Now he’s making Mags question how she does things, which, okay, is his job. Sometimes he’s spot on. However, when someone who had a recent accident has a consistent cough, a good doctor asks about it.

Mags is a good doctor. She’s the exact kind of doctor i would want. She checks everything, and she leaves nothing to chance. Yes, she needs to take care of her own health, both physical and mental/emotional. Yes, she needs to find a work/life balance. 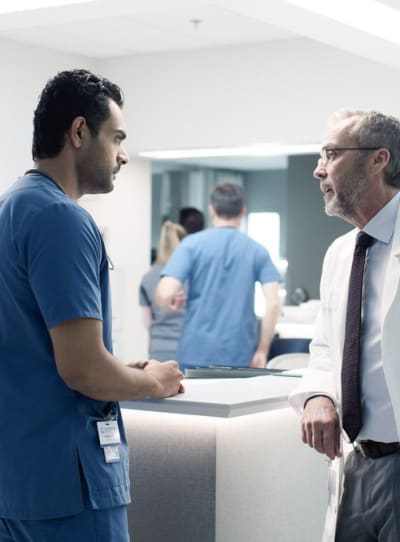 Mags: I noticed him coughing and I should’ve investigated it sooner but, all I could hear was your voice in my head.
Dr. Bishop: Telling you what?
Mags: That I’m focusing on all the wrong things.
Dr. Bishop: That’s your voice, Mags. Not mine.
Mags: This job is all I’ve ever wanted.

She does not, however, need to stop doing the things that make her a good doctor. Screw Dr. Bishop for getting in her head like that. She values his opinion so much, but she didn’t do anything wrong! She’s doing exactly what she’s supposed to do!

I can’t say that I get the point of them emphasizing her attachment to her car, Lenny. It was vaguely interesting, but the follow-up wasn’t really worth the screen time. When I said I wanted to know more about Mags’ personal life, I was hoping for something more than that.

(Also, what band did she see a reunion tour of?)

Speaking of personal lives, I was hopeful when we opened up on Amira that we were going to get an Amira-centric episode. As important as she is to the story, we don’t know much about this girl. It’d be nice to learn more. 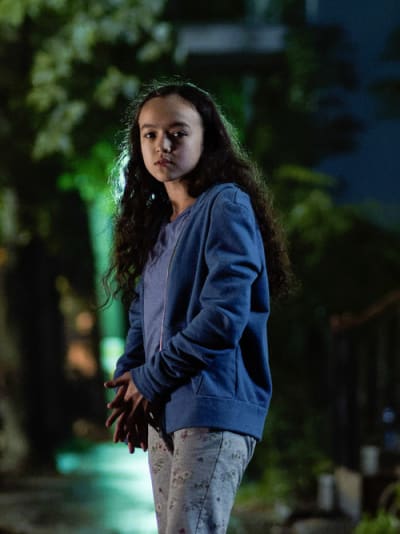 Dr. Bishop: Why did you choose emergency medicine, Dr. LeBlanc? I know for a fact, you could have had your pick of residencies. Why this one?
Mags: Because in emerg you can’t just be good at one thing, you gotta be the best at everything.

It’s hard for a medical show to focus too much on anyone who doesn’t spend their time at the hospital. Hopefully, at some point, we’ll get an episode that really digs into who she is on a personal level.

We learned a little bit more about Theo’s personal life. His father is a pastor, which may be part of why he’s the gentle, pacifist type. There is nothing wrong with that, as Bash pointed out.

Still, sometimes you get to a point in your life where you question how you got here and if you want to do things differently. I think Theo is at that point. He had a very picture-perfect, white-bread upbringing. Again, there’s nothing wrong with that.

There also isn’t anything wrong with expanding beyond it, wanting to see more of the world, and wanting to be more than you are.

Theo doesn’t need to be more in the sense that he’s at all less. He’s great as is, but he’s soul-searching. The world doesn’t seem so simple to him anymore, and neither does his path in it. 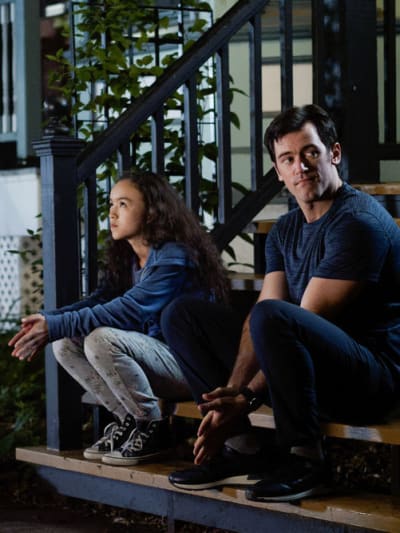 Theo: Well, I’ve never been in a fight.
Bash: I wouldn’t exctly call that a fight. A stranger came out of nowhere and punched you in the face. That’s …
Theo: Twice. And I didn’t do anything to try to stop him. I just froze.

He’ll most likely make the choice to stick around, catastrophic as that may be for his family. His journey’s going to be an interesting one.

June did pretty good this episode, but they’re definitely following the trend they’ve set up for her being underappreciated and underutilized. She caught a big issue, and her superior just took the credit! Jerk.

It did seem like she’s bonding a bit with her mentor though, which should be nice. And maybe it’ll go somewhere. Maybe they’ll blow up the system together!

Dr. Bishop showed signs of being in poorer health than he was letting on. He seemed like he might collapse for a minute. They are definitely setting up for him to be on death’s door in the finale. 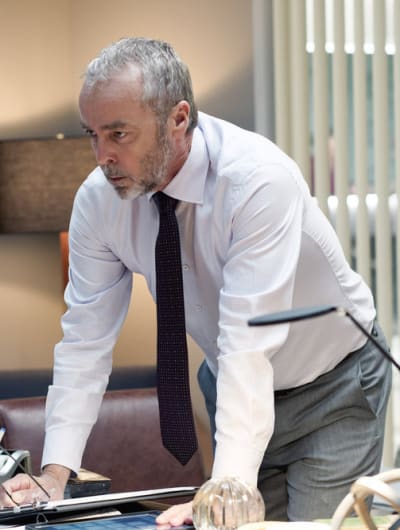 Dr. Bishop: I noticed you haven’t submitted for the fulltime pediatrics position.
Theo: Applications are open for two more weeks.
Dr. Bishop: Wife didn’t go for it, huh?
Theo: Figured it was more of an in person conversation next time I was home.
Dr. Bishop: Smart man. These things never work out unless you’re both on the same page.

Hopefully, he won’t actually die. He’s a good character, a decent guy, and a good doctor (even if I am mad at him right now about the whole Mags thing).

There wasn’t anything particularily shippy this episode, save a few brief moments shared by Claire and Dr. Bishop. Lou only popped up when Theo got punched.

How screwed up was that? It was a little disapointing that there wasn’t more backstory there. The guy was just tired of waiting, so he punched a random doctor. I was expecting something way more serious and involved.

The point apparently wasn’t his anger, but how Theo reacted. And, of course, to give Bash the chance to come in and play the hero. 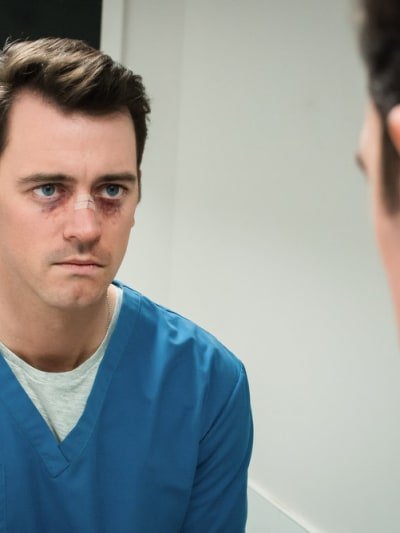 Eva: What happened to your nose?
Theo: To my nose. Wh-? I told a lie, so it grew like Pinocchio’s.

Things are going better for Bash, but he’s still haunted by ghosts from his past. The child with the mask he keeps seeing finally showed us his face, but we still don’t know what it means.

Obviously it’s about something that happened in Syria, but the details are lacking. He really should be seeing someone for his PTSD though, especially if he’s getting these hallucinations.

So what do you think Fanatics? Did you like what we learned about Theo and Mags? Do you want more Amira? More June? Do you agree with Dr. Bishop about Mags fatal flaw? Do you expect Dr. Bishop to make it to the finale?

Let us know in the comments, and remember, you can watch Transplant online right here via TV Fanatic.

Transplant airs on Tuesdays at 10/9c on NBC.

Leora W is a staff writer for TV Fanatic.. 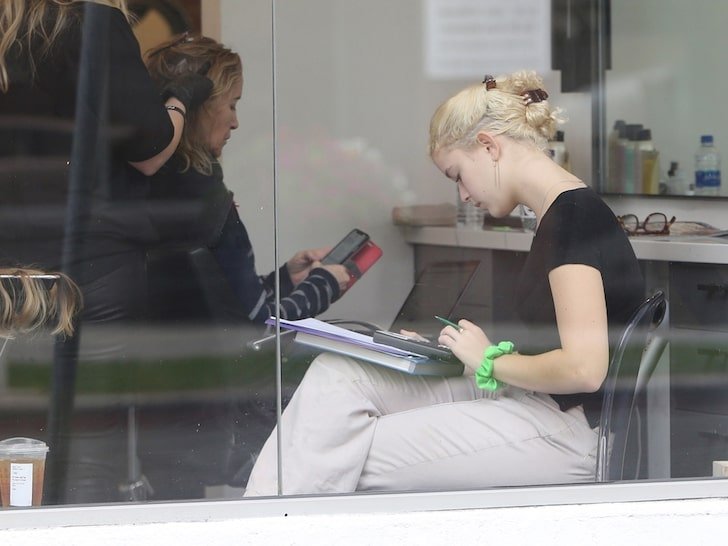