A clothing brand is in such high demand that 30,000 people are currently sitting on its waiting list.

Tens of thousands of people are waiting for the undies to be available.

The basic designs come in a comfy fit – so you won’t be pulling your bra straps up every few minutes.

Unlike the traditional granny pant, the practical lingerie has been created to flatter your figure.

While they may not look anything special off the body, they perfectly contour women of all shapes and sizes.

NOT A PANTS IDEA: More than 30,000 people loving these underwear sets

Everlane revealed that they spent two years developing the product.

A spokesperson said: “Underwear should be made for you. But for decades, it’s been designed with someone else in mind.

“Bras that push, pad and squeeze. Fabrics that suffocate. Lace that chafes. The industry has made billions telling women that in order to feel sexy, they need to look like something they’re not.

“But times are changing – and so should our underwear.”

They added: “Two years ago, our product team set out on a mission: create simple, natural underwear that women can feel confident and comfortable in. No frills. No bows.

“A line of beautiful, Supima cotton underwear that’s healthy on your skin, flatters every curve – and made at a factory that’s leading the way in ethical manufacturing.

“On wages. Workplace environment. And the empowerment of its 50,000 female employees.”

The range certainly looks a lot comfier than some of the bizarre lingerie items we’ve seen recently.

Naked bras have swept social media in recent months, but they won’t provide you much support.

Bondage-inspired smalls have also been sported by brave fashionistas. 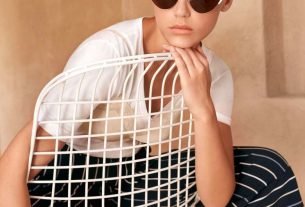