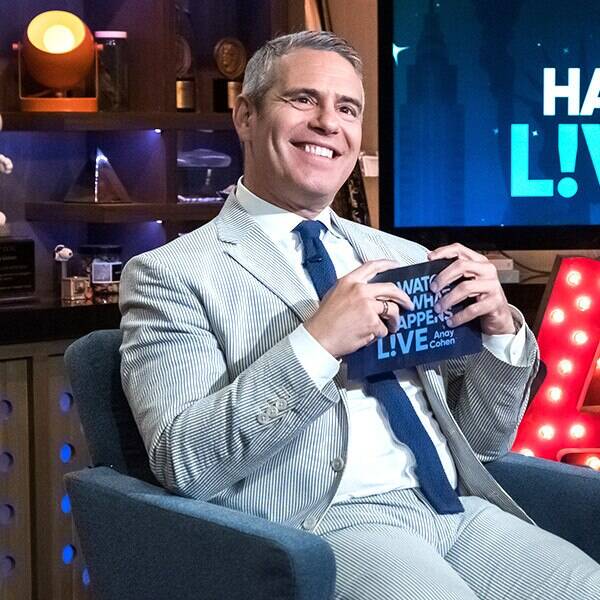 When you get invited to Andy Cohen‘s Clubhouse, things sometimes get shady!

Watch What Happens Live With Andy Cohen is nominated at this year’s E! People’s Choice Awards for The Nighttime Talk Show of 2019 and, out of all the nominees, it’s the most likely place where the guests will spill the tea.

With segments like “Plead the Fifth”, where guests can only skip one of three questions Cohen asks, and being on a set where you can indulge in a little too much bubbly, the celebrities who come onto the Bravo program often get a little punchier than the show’s network competitors.

After all, this is the show where queen of shade Mariah Carey claimed she didn’t know Ariana Grande, Jennifer Lopez or Demi Lovato.

While there have been many epic moments over the years, we wanted to take a look back on what were the shadiest moments that went down in 2019.

To vote for the show at this year’s PCAs, all you have to do is head to the official voting site or take to Twitter to case your ballot.

Be sure to tune into the live show on Nov. 10 to see which late night talk show host will walk away with the prize.

With 43 competitive categories, you’re certain to see one of your favorite stars end up with a trophy!

When a caller phoned in to ask Lindsay what happened between her and her former close friend, Bachelor contestant Raven Gates, Lindsay wouldn’t answer what caused the fallout but said she “never will be” friends with Gates again.

Damn. In case you’re not a member of Bachelor Nation, the two women met on Nick Viall‘s season of The Bachelor. Lindsay went on to become the lead of The Bachelorette, where she met her husband Bryan Abasolo. Later during WWHL, Lindsay admitted that the drunkest guest at their wedding was none other than Alexis Waters, another contestant on Viall’s season who was memorable for showing up on the first night in a shark/dolphin costume.

During the “After Show” segment, a caller asked the daytime talk show host how she felt about Lisa Vanderpumpleaving The Real Housewives of Beverly Hills. Without missing a beat, Williams quipped, “Who?” She later elaborated, “The thing is that I love Lisa Vanderpump…but these housewives, people don’t understand. Me, [Andy], everybody is replaceable.”

Later, she was asked who was her least favorite person to appear on her show. While she wouldn’t name names, she did drop the hint that it was a male guest.

When Burgess appeared on WWHL in July, things got tense. Burgess was speaking on working on Eddie Murphy‘s film, Dolemite Is My Name, when Cohen asked if the two got along and continued that, “I just wondered if you got close at all because [Murphy] was very problematic for the gays at one point when I was coming up.”

Burgess responded that, “Any troubles [Murphy] had with gay people I guess are gone because he loved me.” All seemed fine until Burgess motioned something to someone in the audience. Cohen asked what he was saying and Burgess retorted, “Keep going girl, do your show.”

The next day, Burgess took to Instagram to sound off on the incident commenting, “She can be a messy queen! Yes I said it! Don’t care he knows either! He should remember his talk show isn’t an episode of the real housewives of Atlanta! It’s a place where artists come to talk about art and have a little fun. NOT a place to rehash old rumors or bring a star negative press.”

As for Cohen? On his SiriusXM show Andy Cohen Live, he revealed Burgess didn’t sign his guest book on his way out and that, “”He wasn’t having me. What can I tell you? From the jump. I was trying, but no idea.”

During the “After Show” segment, a caller asked McCain if she’d ever consider running for office and the View host started to describe how she’s thought about it, joking she thinks about other jobs since she’s always nervous she’ll get fired from The View. Real Housewives of Orange County star Dodd interrupted to say McCain is a “trust-fund baby” and has no reason to worry.

Cohen paused to say McCain has accomplished career milestones and makes her own money, but Dodd continued saying, “I’m saying she doesn’t need the job.” McCain said she wasn’t offended and admitted to “coming from privilege” and Dodd jumped in again saying, “She has a PHD: papa has dough.”

McCain was bristled and shot back, “Honey, it’s actually my mother, but that’s okay”. Dodd then yelled out “Coors Light” as a reference to McCain’s mother being chair of the Hensley Beverage Company (although, as McCain pointed out, the correct beverage would be Bud Light.)

On Cohen’s “Plead the Fifth” segment, the Simple Life star was asked to say three positive things about her former friend Lindsay Lohan. Hilton paused for a beat and started with, “She’s beyond.” However, the cryptic message became clear when she continued to add “lame” and “embarrassing” to round out her answer.

In case you forgot the height of celebrity friendships in the mid-2000s, Hilton and Lohan used to roll with Britney Spears. However, the two are no longer friendly and last year Hilton commented that Lohan was a “#PathologicalLiar” on a series of videos showing Lohan going back and forth on a story about the hotel heiress. Clearly, the drama from 2006 really never dies.

(E! and Bravo are both part of NBCUniversal).