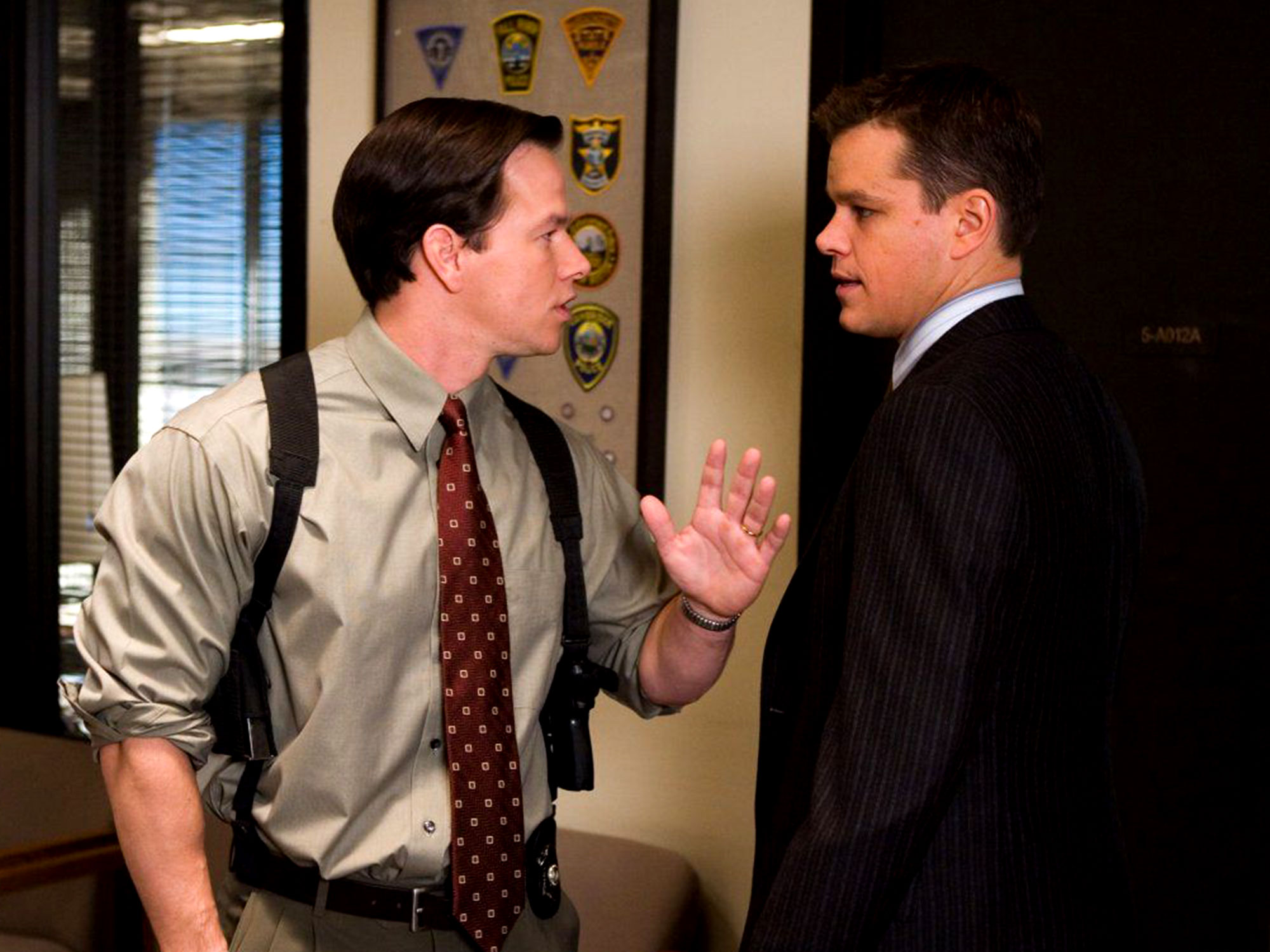 It’s easy to miss: more sarcastic snarl than actual speech, he addresses it as much to the floor as to Matt Damon’s fresh-faced young sergeant Colin Sullivan, who he is ostensibly congratulating on his graduation to the force, and who looks up at his superior with an expression of half-amused bewilderment. But it’s a moment worth paying attention to – not only does it tell you everything you need to know about Dignam, it is also the key to understanding the film itself.

The word “fuck” appears 257 times in The Departed. That’s roughly once every two minutes, making it only Scorsese’s fourth most profane film (The Wolf of Wall Street boasts a whopping 569 F-bombs). Such excessively foul language might seem profligate; a lazy way to inject some decorative grit into a world of mobsters and murderers. But in the hands of Scorsese and screenwriter William Monahan it is a strategic choice.

Swearing quickly becomes the currency of the film’s central preoccupation: how to make your way as a hard man in a hard town. The Departed is full of variations on this theme, encompassing both the cops – in addition to Dignam and Sullivan, there’s Leonardo DiCaprio’s undercover trooper, Billy Costigan, and the loud-mouthed Captain George Ellerby, played by Alec Baldwin – and the mobsters they’re pursuing. This second group is led by Al Pacino’s psychopathic Frank Costello, who’s the kind of guy who idly plays with a severed hand while enjoying his morning macchiato.

Despite falling on different sides of the law, these men share more than the sum of their differences; both ethically and temperamentally. (The mirrored existence of the two central characters, Sullivan and Costigan, demonstrates this larger truth in microcosm.) The manner of their constant cussing is indicative of a common temperament: a wry world-weariness coupled with a need to speak plainly and to the point. When Dignam says “whoop-de-fucking-doo”, what he means is “this is a tough job for serious people and you’re going to have to do a lot more than graduate from the police academy to impress me.”

The Departed’s swearing is also very funny. The humour lies in the tension between this very straight-talking quality and the expressiveness, almost poeticism, of the language itself. The film’s profanity is ornate, almost verging on baroque. When asked by a fellow officer whether his department has any undercover cops in Costello’s gang, Dignam replies with a perfect tricolon: “Maybe. Maybe not. Maybe fuck yourself.” This rhetorical flourish lands with devastating effectiveness; his colleague cowers in his seat as Dignam smirks.

Such linguistic flair is undoubtedly connected to Boston’s Irish heritage. Irish Americans are the city’s single biggest ethnic group and, as apparent in the character names, they dominate the film (in this respect, the casting of Italian-American Pacino is surely its least convincing element). Scorsese himself is Italian-American, of course, but Boston native Monahan draws upon his own community’s identity with great authenticity. Without trading in nationalistic stereotypes, The Departed pays filthy tribute to Ireland’s rich literary and poetic history.

Dignam and Ellerby are the film’s most enthusiastic swearers and, not coincidentally, its most memorable characters. They head up rival departments within the force, and when we first see them interact their good-natured rivalry is played out in a theatrical verbal sparring match. “Go fuck yourself,” Ellerby tells Dignam. “I’m tired from fucking your wife,” Dignam replies. “How’s your mother?” “Good. She’s tired from fucking my father.” They then continue to talk shop, perfectly amicably. Having struck two blows each, they are both, it would seem, content to cease hostilities. Swearing is thus a kind of safe form of play-fighting; the civilised officer’s version of a dick-measuring contest.

Except that in The Departed, no one is really civilised: good men turn bad or get killed; bad men come out on top. This corruptness is present in the language: characters pepper their speech with “shit”s and “fuck”s because theirs is a world in which people are constantly being pushed out or screwed over. “What’s the matter smart ass, you don’t know any fucking Shakespeare?” Dignam asks Costigan at one point. Who needs the bard when you have blasphemy this good.