The Washington Post’s Philip L. Graham has been widely credited with declaring journalism “the first rough draft of history,” though as first drafts go, it’s especially rough. If for no other reason than posterity’s sake, the human species compulsively documents each day from the blinkered vantage of real time, collections of events and data synthesized into instant reactions on the internet and pages of op-ed sections. The goal is to make sense of a hectic present, but that initial wave of chroniclers is handicapped by immediacy, the facts yet to cool into a narrative visible in full.

As a form of collective public memory, history begins in earnest with the movies, which channel political and social realities with the benefit of perspective into what critic J. Hoberman termed the “dream-life.” Now nearly a quarter of the way into our young century, a sufficient amount of time has passed for a lucid notion of this moment to take shape through the cinema, in particular those films that emphasize their own distance from the most recent chapter of the past. While every work of art is a relic of the cultural conditions under which it was made, some attempt to dramatize and analyze the steps we’ve taken to get here.

Along these lines, I’ve been thinking about the 21st-century period piece, for our purposes any movie produced after the year 2000 and set in an earlier part of the post-Y2K era. (Those with extensive flashbacks taking place in 1999 or earlier are disqualified, as are those without discernible markers or mentions of setting.) Considered as a canon, they illustrate both the significance of chronology-defining events and the individual ramifications they hold for the people involved — those figures standing astride major developments and those just trying not to get crushed underfoot by the onward march of progress all around them.

Filmmakers have taken an interest in the “Great Man” theory of history ever since Charles Foster Kane dropped his snowglobe, though as in that searing portrait of a thinly veiled William Randolph Hearst, the concept is reversed as the flaws in our most influential titans of industry and government expand to national and even global proportions. The Social Network‘s take on Facebook co-founder Mark Zuckerberg (however inaccurate, casting the man we all now know as a particularly advanced automaton in a light of emotional profundity) diagnoses the whole of Silicon Valley as the bitter revenge of the nerds, the advent of Big Tech reorienting popularity at the cost of real-world isolation. In Maya, the fictionalized intelligence specialist tracking down Osama bin Laden in Zero Dark Thirty, the United States’ war on terror takes human form as she crosses some crucial ethical lines in pursuit of closure, vengeance, or just a positive report she can take back to her superior. (The Hurt Locker, the other half of Kathryn Bigelow‘s GWOT Diptych, catalogues the traumas that the American occupation of the Middle East inflicts on the soldiers in the action.)

The coordinated attacks of 11 September loomed large over Hollywood in the following years, and not just when American Airlines Flight 11 plowed into Robert Pattinson to bring 2010’s romance Remember Me to a stunningly miscalculated twist ending. For teen girls Lady Bird of Lady Bird and Lisa of Kenneth Lonergan‘s Margaret, the geopolitical havoc raging in the background of their lives throws their adolescent solipsism into sharper relief, the former tuning it out whereas the latter goes knee-jerk jingo, both reactions more in response to the personal quagmires in their own lives.

More commonly, the fiery death screaming through the sky served as a reminder of life’s preciousness, John Cameron Mitchell‘s pansexual fantasia Shortbus thumbing its nose (and other parts) at the fleeting nature of our mortality with an orgy-jamboree celebrating vitality. Brady Corbet‘s ambitious Vox Lux conspicuously announces its historical bent early on with mentions of Reaganomics and the pop-musician diaspora out of Sweden, with its primary focus placed on the spectacles of violence setting the terms of a chaotic new world; a Columbine-like incident and the destruction of the World Trade Center bracket the first half in 2001, then a mass shooting on a European beach casts a pall over the ’10s in the second.

As the rushed-to-market deluge of COVID-related content can attest, filmmakers are attracted to big happenings, and the only other cataclysm that’s commanded as much retrospective attention as 9/11 is the financial crash of 2008. Explained from a smug bird’s-eye view in The Big Short and with boots-on-the-ground empathy in 99 Homes, the housing crisis upended the classed pecking order with the cruel poetry of a Greek tragedy. Seeing rich people in panic mode makes for satisfying drama, the driving engine of the scammer epic Hustlers, in which a squad of crafty strippers fleece the Wall Streeters coming in from a long day of fleecing hardworking regular folks. Their white-collar marks might as well make up the ensemble of Margin Call, as a group of investment bankers scramble to screw their clients out of their money before the firm goes belly up.

“America is one big strip club,” says J. Lo in Hustlers, echoing Killing Them Softly’s parting sentiments of refutation to the hollow hope offered by Barack Obama’s election to the White House. The cynicism rampant in this time translated to shrewd self-interest where personal accounting was concerned, and no one kept a closer eye on her money than Chelsea, the high-end escort prowling through downtown Manhattan’s financial sector in The Girlfriend Experience. As she pumps her various johns for stock tips and other advice that might give her a leg up as the economy goes into a tailspin, director Steven Soderbergh suggests that lean times have made us all just as ruthlessly bottom-line-minded as she is. (2012’s Magic Mike, another Soderbergh film about the intersection between sex work and capital in the post-meltdown paradigm, shares in a cash-strapped dread traded for a rise-and-grind can-do attitude in the sequel.)

In the numerous ripped-from-the-headlines pictures rehashing the playback of noteworthy true crimes — whether in investigative pieces like Spotlight and She Said, or buzzy reported-article adaptations in line with The Bling Ring and Bad Education — supplementary details hint at the pieces of zeitgeist that might endure as part of the lasting pop-cultural picture. A passing mention of nude-posting Reddit boards in Red Rocket situates the film on the eve of Donald Trump’s 2016 election to the presidency, just after DIY porn had begun its great democratization but before the advent of OnlyFans. Uncut Gems plays out in 2012 because that’s when a sufficiently dramatic NBA playoff game happened to take place, but directors Benny and Josh Safdie capitalize on the lack of smartphones or legalized sports betting in New York that would have radically altered Howard Ratner’s life.

Still being in the thick of the pandemic, it’s difficult to see the lockdowns and paranoia of the last three year with any sort of distanced clarity, though COVID has given a few solid punch lines to the timely Glass Onion. But most of the slapped-together quarantine artifacts (once upon a time, Anne Hathaway was in a film called Locked Down) prove the dangers of making haste, drawing rash conclusions that already look out-of-date by the time the final cut make it to viewers.

The earliest stories on record were creation myths, devised to explain natural phenomena too massive to be controlled; today, we engage in a secular equivalent of this ritual, organizing the messiness of existence into stories rendering it comprehensible. This constant recontextualizing can be a source of comfort, if one wants it to be. Fads fade and disasters beget new disasters, but the tendency toward self-scrutiny has been the one constant through all of modern life, each generation equally assured that it’s living through the end times. Surveyed as a whole, this body of work posits the heartening theory that as years tick by, the only guarantee is that there will always be more of them. 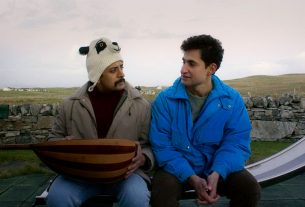 ‘Spider-Man: No Way Home’ Has Third Biggest Opening Weekend Ever