LONDON TUBE: This commuter’s dress went viral – but for all the wrong reasons (Pic: IMGUR)

In the photo, it shows a woman travelling in a London tube carriage speaking to two men in suits.

She is wearing a black and white monochrome dress with her hair down.

It soon went viral after one unnamed passenger shared the image on Ranker, with the caption: “A pattern of bad behaviour.”

But can you see why the dress can be misconstrued as something ruder?

“A pattern of bad behaviour”

If you look closely, the woman is wearing a simple patterned dress.

Sadly for the commuter, the monochrome dress has an unfortunate design over the bum, which can be mistaken for something else.

Meanwhile, this isn’t the first time a person’s outfit went viral for the wrong reasons.

FASHION FAILS: The pattern on her dress can be misconstrued as something quite naughty (Pic: IMGUR)

Previously, one woman was left red-faced she shared her holiday selfie online.

Angelee Choa took a snap of herself wearing a patterned swimsuit in the changing rooms of a store.

But people couldn’t help but notice the palm trees on the design gave the illusion of another kind of bush.

One person joked: “Aren’t you suppose to trim up before you wear a bathing suit?”

Also, this mum was left horrified after spotting something X-rated about her dress.

She spotted a cheeky silhouette of a naked woman on the pattern.

The woman’s daughter shared the snap on Imgur, she wrote: “My mum has been wearing this summer dress for years and no one noticed the pattern until now…”

15 Lipsticks You Should Spend Your Paycheck on 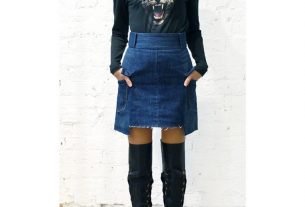