A photo of a woman pushing supermarket trolley  has gone viral online after a shopper noticed something strange about her outfit.

At first glance it appears the woman has opted for a very X-rated look. But if you take a second look you’ll see what’s actually going on.

Sharing the snap on Facebook, Reannon Allison wrote: “We were all so concerned with her pants we didn’t notice the 175-month-old in the buggy!”

The woman wore a cream lace top teamed with a black vest underneath.

But the flesh-coloured leggings she wore on her bottom half created a weird illusion, which made her look naked.

Since it was shared on Facebook earlier this month, more than 9,100 people have commented on the outfit disaster.

One wrote: “Thought she didn’t have pants on till I looked at her ankles.”

While another joked: “Honestly thought she was naked waist down.”

A third added: “Not a good look when you’re commando.”

And a fourth commented: “Wow leggings really aren’t for EVERYONE.”

But this isn’t the only time someone’s gone viral for a fashion mistake.

The design contains an awkward positioning of Cruella de Vil, with the Disney villain’s face planted on the woman’s crotch.

Then a London tube commuter caused a meltdown online when her monochrome dress contained a rude print.

It soon went viral after one passenger shared the image on Ranker, with the caption: “A pattern of bad behaviour.” 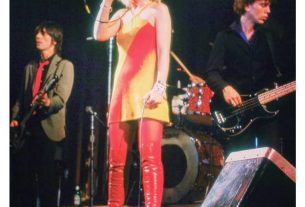