SUITS YOU: Ralph & Russo’s racy designs are rumoured to be a hit with Meghan

The royal wedding is taking place in a matter of days.

As the nation prepares to watch Prince Harry and Meghan Markle tie the knot, many have been speculating about what the ceremony will be like.

There are some details we know for sure, from where the venue is and who the bridesmaids will be.

But there’s one major feature of the day that many are dying to know more about – and that’s what Meghan will be wearing.

Meghan is known for her sharp sense of style, so there’s no doubt she will pick something stunning.

The competition to design the soon-to-be royal’s outfit is likely to have been very fierce.

But rumours have been swirling about one coutirist in particular.

Many believe that Ralph & Russo are the brains behind the former actress’ gown.

DRESS TO IMPRESS: The British designer is known for its ostentatious gowns

The British designers are known for their decadent bridal wear.

While their gowns exude luxury, they are a little more risqué than you would expect for a member of the Royal Family.

Over the years, they have sent countless sexy garments down the catwalk.

Many of the dresses incorporate lace or sheer material, which provides little coverage for the skin.

RACY AND LACY: Some of the gowns feature a nude slip, which provides more coverage

The see-through nature of the gowns has led to some models flashing their private parts on the runway.

While flesh-flashing looks are some of Ralph & Russo’s most notorious, some of their other styles are slightly more covered up.

Nude slips have been sewn into many of the fancy frocks.

This allows brides to create the illusion that they are nude without actually showing off anything they don’t want to.

If Meghan does go for a sheer bridal gown, she wouldn’t be the first to do so this year.

Kate Upton also stunned her wedding guests by stepping out in a transparent outfit.

And this bombshell bride dropped jaws when she debuted a see-through jumpsuit on Instagram. 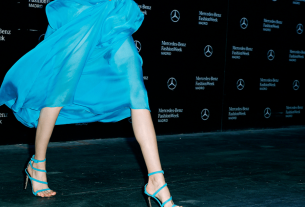 Vote: Which Star Was Best Dressed at the 2020 BAFTA Film Awards?