However, the actress’ fashion choices haven’t always been quite as chic as they are these days.

Gemma Atkinson, who is currently loved-up with Strictly dancer Gorka Marquez, shared a snap of herself back in the day on Instagram earlier in the week.

And it got us curious about other looks that the bombshell has rocked over the years.

The results are certainly interesting, let us tell you.

TRANSFORMATION: Gemma used to look a lot different at the start of her career

The Bury-born star first started out playing Lisa Hunter in Hollyoaks between 2001-2005.

And she rocked some rather daring looks back in the day.

One photo we dug saw the beauty rocking a completely different hair look as she rocked short and spiky locks.

She was seen teaming this with a strapless black gown as she attended the RTS Programme Awards back in 2005.

IMAGE OVERHAUL: The star rocked brunette locks back in 2004

SKIMPY: She also rocked some rather revealing outfits on the red carpet

Meanwhile, Gemma was seen as a brunette at the Inside Soap Awards Party even earlier in 2004.

She showed off her figure at the event in a plunging green cut-out dress, which showed more than a bit of skin.

This was pair with strappy silver heels and a matching miniature handbag.

However, this wasn’t as risky as her outfit to the 2005 British Soap Awards, when the blonde bared her underwear on the red carpet in a completely sheer back dress.

NOW: Gemma is a fan of the sophisticated look these days

FITTY: The actress is also heavily in to her fitness

Following her time in Hollyoaks, Gemma had a role in Casualty and played Carly Hope in Emmerdale before taking part in Strictly Come Dancing last year.

Today, she is more likely to be posing in gym wear than see-through dresses as she takes her fitness immensely serious.

Well, they do say that strong is the new sexy. 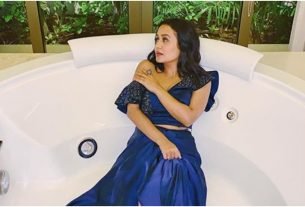